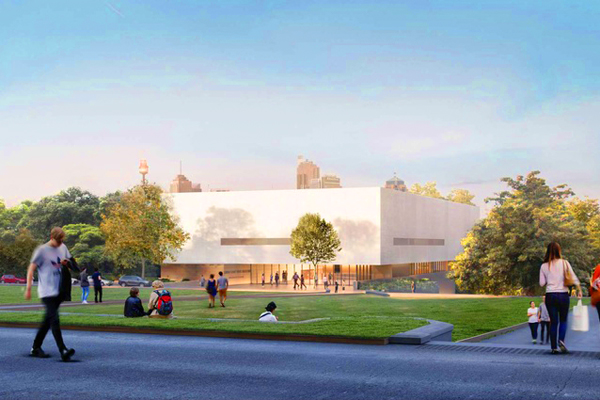 Designs for the University of Sydney’s proposed Chau Chak Wing Museum by Johnson Pilton Walker (JPW) are on exhibition for public comment.

The proposed museum will house both the university’s art collection and several collections of archaeological and historical material, including a collection of artefacts from the Middle East, Greece, Italy and Cyprus that is the largest collection of its kind in the southern hemisphere.

The building will occupy on the site of the existing Fisher Tennis Centre on University Avenue, adjacent to University Place at the Camperdown Campus.

The building will be located opposite the Fisher Library and Bookstack designed in 1958 by the NSW Government Architects Branch (project architect Ken Woolley and government architect Edward Herbert Farmer) in association with T. E. O’Mahony and built in 1962 and 1971.

”Together with the Fisher Library to the south, the Chau Chak Wing Museum frames vistas to and from the Quadrangle and forms a new gateway to the campus,” said JPW in a design statement. The height of the museum will also relate to the Fisher Library.

“The arrival sequence creates a transition between the large, open civic-scaled spaces of University Place and Eastern Avenue and the more intimate human-scaled spaces within and around the building,” said JPW. The entry forecourt provides a space for groups to gather, as well as views of the university’s Great Hall to the west.

The proposed museum’s design consists of an off-form, “floating white concrete box” atop a base of sandstone-coloured precast concrete panels.

Internally, open stairs and a central triple-height atrium with diffused skylights will link all the levels. A large custom display vitrine will also link the ground and lower exhibition galleries. The building will also integrate gallery spaces with specialist study rooms.

On the eastern side, where the ground slopes toward Victoria Park, a cafe terrace and a courtyard will be created to provide sheltered external spaces for a variety of uses including public events and functions.

The new museum will house artistic, scientific and archaeological artefacts from existing collections, which, in total, contain an estimated 700,000 items. These include the Macleay collection, comprising both the oldest natural history collection in Australia and a collection of Aboriginal, Torres Strait and Pacific island material; the Nicholson collection, which contains the Southern Hemisphere’s largest collection of artefacts, which come from from Egypt, Greece, Italy, Cyprus and the Middle East and the University Art collection, which holds a range of Australian, Asian and European artworks, including Chinese art and Japanese woodcuts. Artworks from the Power collection will also be housed in the new museum.

Currently, only one percent of the collections can be displayed. The new museum will provide 1,800 square metres of exhibition space, allowing a greater number of the artefacts to been seen by the public.