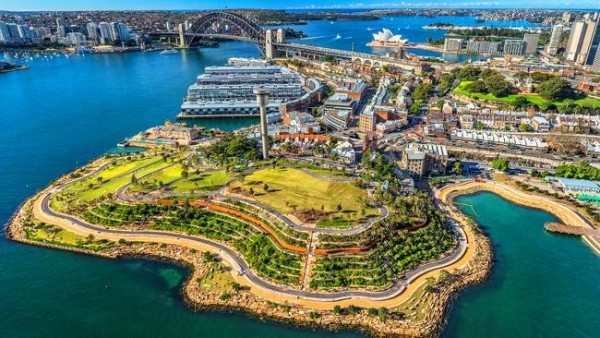 It sits beneath a hill, hard up against a dramatic sandstone wall. It’s called the Cutaway, and this is the giant, cavernous space reserved for cultural activities inside the Barangaroo development now taking shape on the western edge of the Sydney CBD.

Brook Andrew was one of the artists invited to explore this concrete canvas, and he was struck at once by its power. He describes it as “awe-inspiring”, reminiscent of the Tate Modern experience in London. It seemed as though he was inside the land, or perhaps inside the body of a whale. Like Barangaroo itself, the multi-billion-dollar development soon to be home to James Packer’s casino, the numbers give an idea of the scale: 7500sq m of space, 150m long and 15m high, it sits under 12,000cu m of land and is said to fit 5500 people.

This weekend, the first stirrings of a grand dream will begin at Barangaroo with the unveiling of Andrew’s work at the Cutaway. His four sculptures are called Stone: The Weight of History, The Mark of Time, and they are intended to immerse viewers in a “breathing lung-like imaginative environment” that brings to life the land. “It’s really looking and acknow­ledging the history of the place and the site,” he says. “They breathe like lungs. They exhale and inhale. It will be like moving through some sort of organ or beast.”

Andrew’s sculptures are the first of three commissions to be shown monthly at the Cutaway in spring, followed by installations focusing on the sea and sky. Spread across 12 weekends, the celebration includes free performances, talks and tours. The program is designed to draw crowds to Barangaroo Reserve, the parkland that opened two weeks ago. But as the bigger picture comes into view — gradually, meticulously, each element carefully considered by an army of advisers after years of consultations and reports — it’s clear it also represents the early stages of a vast cultural project under way in Sydney. “I think it’s a reality check,” Andrew says. “It’s like Australia’s coming of age with this sort of project.”

In July, the Barangaroo Development Authority released a public art and cultural plan, an 84-page blueprint full of grand aspirations. Under the plan, nine main projects would be funded by a development levy of 1 per cent, with the total cost across 15 years expected to exceed $40 million and cost the taxpayer nothing. Proposals range from large permanent installations to artworks integrated into the environment to as-yet undefined cultural hubs.