September 27th, 2019 | Browse other: News. | Tagged with: Sydney has a lot of large conspicuous native birds that are doing well | 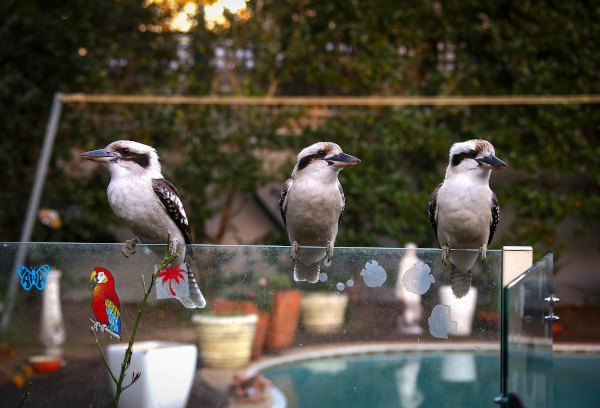 Kookaburras, with their maniacal “koo-koo-kah-KAH-KAH” call, are part of the lively bird scene in Sydney.CreditCreditDavid Gray for The New York Times.

Damien Cave, Sydney Is for the Birds. The Bigger and Bolder, the Better, The New York Times, 21 September 2019

SYDNEY — The bushy pair of laughing kookaburras that used to show up outside my daughter’s bedroom window disappeared a few months ago.

The birds simply vanished — after rudely waking us every morning with their maniacal “koo-koo-kah-KAH-KAH” call, after my kids named them Ferrari and Lamborghini, after we learned that kookaburras mate for life.

And here’s the odd thing: I missed them.

This is not normal, at least not for me, but Sydney has a rare superpower: It turns urbanites into bird people, and birds into urbanites. Few other cities of its size (five million and counting) can even come close to matching Sydney’s still-growing population of bold, adaptable and brightly colored squawkers.

“We’ve got a lot of large conspicuous native birds that are doing well and that is very unusual globally,” said Richard Major, the principal research scientist in ornithology for the Australian Museum in Sydney. “It’s quite different in other cities around the world.” 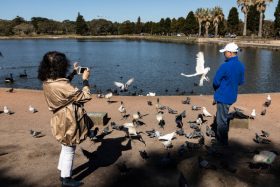 The reasons — some natural, others man-made — are fascinating, and we’ll get to them. But lest anyone doubt Mr. Major’s assertion, at a time when the bird population of North America is suffering a steep decline, compare a typical day of avian interactions in Sydney with anywhere else.

Morning here begins with a chorus. Relentlessly chirpy, the noisy miner blasts the alarm before dawn alongside the screeching and flapping of rainbow lorikeets, parrots brighter than Magic Markers and that argue like toddlers. And of course, there are the kookaburras, with their cackles carrying across neighborhoods declaring: “This is MY territory!”

A walk to the car or train may require dodging attacking magpies — in spring, they swoop down on your head to protect their young — and rarely does a week go by without seeing a sulphur-crested cockatoo, or a dozen, spinning on a wire like an escaped circus act.

Even the local scavenger is extraordinary. As grubby as any New York pigeon but much grander, the white ibis, known here as a “bin chicken,” is a hefty, prehistoric-looking creature with a curved beak.

Even as ornithologists point out that some small birds are struggling in the city, they note that a generation or two ago, Sydney didn’t have nearly as much avian diversity as it does today, nor as many flocks of birds that have mastered what city living requires: competitiveness, an obsession with real estate and the ability to adapt. 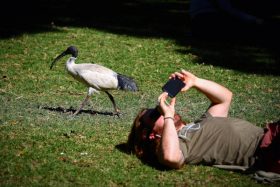 A white ibis, known in Australia as a “bin chicken,” in Hyde Park in Sydney.CreditDavid Gray for The New York Times.

Why so many birds are thriving here is increasingly a subject of international study. Scientists believe it is due in part to how Sydney was settled — relatively recently, compared with many global cities, with less intrusion into wildlife habitats.

The luck of local terrain has helped. Sydney’s rocky coastline didn’t lend itself to clearing land for agriculture, which slowed development and left lots of native plants untouched. Australia’s early leaders also set up large national parks near Sydney, protecting bushland for animals of all kinds.

But making the city a bird capital was probably not on their agenda. The British colonialists in charge hated the sound of Sydney’s birds enough to import songbirds like common starlings to soothe their tender ears.

Today, some early examples of those imports, from the 1860s, are stuffed and tagged in the Australian Museum’s collection room. When I stopped by one recent morning, Leah Tsang, the museum’s ornithology collection manager, sifted through the white metal cabinets containing the taxidermy archives to show me the supposed improvement sent from Europe.

The juvenile starlings in the tray looked small, dark and … dull.

A few cabinets over, Dr. Tsang showed me her own favorite bird — the princess parrot, a lovely Australian specimen of soft pastels, in pink, blue and green.

If the young starling’s feathers evoked the lackluster mood of a Benjamin Disraeli portrait, the princess parrot was Elton John.

“I had one as a pet when I was a kid,” said Dr. Tsang, 40, who sported some bold plumage herself, a shock of electric blue hair in a ponytail. “Its name was Cheeky.”

She told me she came to birds late in life, at least as a career. She worked in technology for nearly a decade before ditching it for the birds.

“You want to do something that fulfills you and makes you happy,” she said, standing near a display of little penguins (yes, balmy Sydney has penguins, too). She paused, and later told me she worried about sounding like a cliché.

But there’s no need to be ashamed of bird-loving. Not in Sydney.