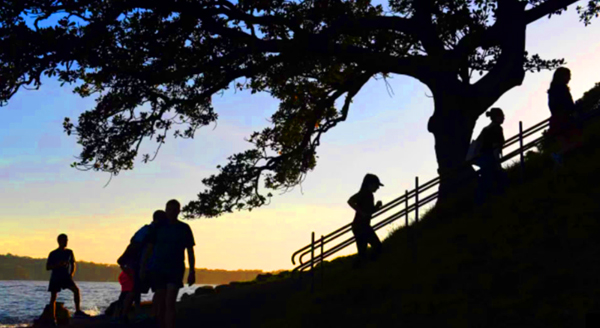 Early morning joggers enjoy the views and the green space on Sydney’s foreshore: A new report seeks to value the contribution that the Royal Botanic Gardens and Domain Trust makes. Credit: Nick Moir.

Out for an early walk on Tuesday in Sydney’s Royal Botanic Gardens and Mrs Macquarie’s Chair, international visitor Jason Nabi didn’t hesitate when asked what he thought of the gardens.

“It is incredible. Just the trees alone,” Mr Nabi said.

“How can you not be inspired? It is literally the most awesome collection of botanical species. And the setting; it is beautifully clean and well-managed and that’s the view,” he said, pointing across Farm Cove to the picture postcard backdrop of the Opera House and the Harbour Bridge.

“It only really works because of the park: you surround that with a bunch of high-rise buildings around here, and it will devalue the identity of Sydney.”

Each year the three gardens – Sydney, Mt Annan and Mount Tomah – and the Domain attract about 5.8 million visitors found a new report to evaluate the social, economic and cultural contribution of these properties operated by by the Royal Botanic Gardens and Domain Trust (RBGDT).

The report by Deloitte Access Economics valued the gardens and the Domain’s assets at $510.2 million in financial terms.

It estimated the gardens – one of the top 10 most visited destinations by international tourists – contributed about $140 million in tourism to the NSW economy in the 2016/2017 financial year, with many foreign and domestic visitors staying longer to enjoy the gardens.

It also made a social and cultural contribution valued at $180 million to the residents and city workers by providing enjoyment, green space and somewhere to exercise.

The parklands provided an “important green space right on the harbour’s edge with aesthetic views of the city skyline and out across the harbour,” which aligned with DestinationNSW’s “vision of green space”. They also offered a “natural physical beauty” to the increasing number of tourist coming from more crowded and densely populated cities in Asia.

She recently announced a $60 million investment to create a new home for the National Herbarium of NSW at the botanic gardens at Mt Annan.

“This report shows our botanic gardens make a huge contribution to real jobs and the NSW economy,” said Ms Upton.

To Woolloomooloo resident Genelle Nicholls, the gardens are an “amazing” local resource. She walks there three times a week, and often walks from home to the Opera House for events.