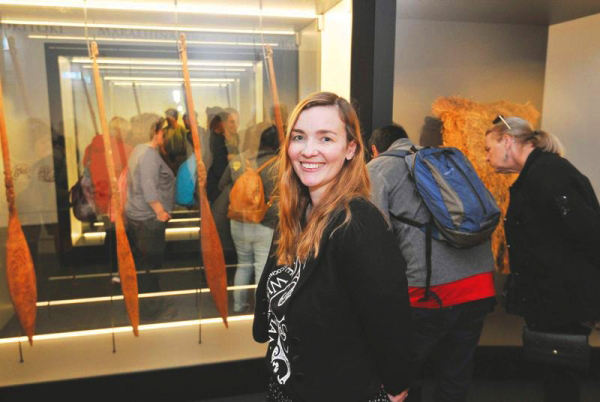 Insurance OK allows 37 pieces to remain at the museum into 2021.

A blessing and a curse is how artist Steve Gibbs once described the preservation of patterned hoe (waka paddles) in European museums. A blessing and a curse is possibly how those museums feel since the Covid-19 global response means the 37 taonga traded with, and gifted to, British explorer James Cook’s crew and Raiatea arioi, Tupaia, in 1769, will remain on loan to Tairawhiti Museum a little longer.

The indemnity — the comprehensive form of insurance compensation for damages or loss — has now been extended until next year.

The taonga are on loan from the British Museum, Pitt Rivers Museum University of Oxford, University of Cambridge Museum of Archaeology and Anthropology, Great North Museum: Hancock, and Tubingen University Museum, Germany.

“We worked with all partners on an extension for the exhibition,” says Tairawhiti Museum director Eloise Wallace.

“We’ve been in constant contact since the Covid-19 situation began. All museums in the UK were more affected than we were. The safest thing is for the taonga to stay where they are. We’ve worked most of the year on getting the extension.”

Although Turanganui-a-Kiwa is on the other side of the globe, the European museums and Tairawhiti Museum share mutual trust, says Mrs Wallace.

“I’m sure our colleagues in Europe looked at what was happening in New Zealand and thought the taonga are better off here.”

Elated to have taonga a little longer

While the museum was closed during Alert Level 4, maintenance and exhibitions officer Jonty Hall carried out daily checks on the safety of the taonga, and ensured environmental and security conditions were maintained.

The various alert levels also compromised delivery of Tairawhiti Museum’s educational programmes and wananga around the taonga. The loan extension is an opportunity to pick those programmes up and attract visitors during summer.

“Part of the opportunity with the exhibition extension is that it is an additional drawcard to attract New Zealand visitors to Tairawhiti over the summer,” Mrs Wallace said.

The museum is keen to encourage businesses to take their staff to the exhibition for a guided tour to learn more about the taonga and encounters with tangata whenua of Turanganui-a-Kiwa and Te Aitanga-a-Hauiti during the month the Endeavour sailed the coast of Tairawhiti.

“Turanganui-a-Kiwa and Te Aitanga a Hauiti iwi are elated that our taonga will remain with their people, on their whenua for a little longer yet, says Hei Kanohi Ora chairwoman, Huia Pihema.

Groups from the British High Commission in Wellington, Te Papa Tongarewa trustees and Friends of Te Papa, and Gisborne Chamber of Commerce members are among recent visitors to the exhibition.