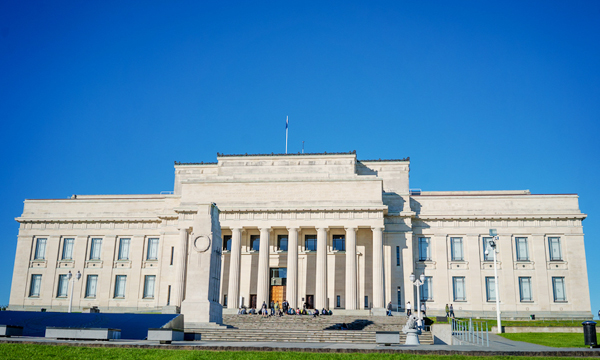 Henry Oliver, A view into the city’s future through the taonga of Auckland Museum, The Spinoff, 13 June 2018

Henry Oliver explores the corridors and changes happening at Auckland Museum, and what they say about Tāmaki Makaurau.

Cities change. It’s part of their essential nature. A product of their population, cities are constantly transforming as they attract new people and lose others. While the hills and the water and sky remain, essentially, unchanged, everything else changes – sometimes quickly, sometimes slowly, but always irrevocably. And, if you hadn’t noticed, Auckland is changing faster than most.

Its growth is the product of increased immigration, a growing New Zealand-born population, and changes in the economy bringing more New Zealanders into service and knowledge-based (rather than agricultural) work. Auckland is currently home to over 1.6 million people, most of whom live within its urban area. As the fastest growing region in New Zealand, that number will reach about 2.2. million in the next 20 years, making up almost 40% of the country’s population. And this great increase will also bring great change in the demographics of the communities who live here.

Auckland’s Māori population will continue to grow. In 20 years, a quarter of all Māori will live here. The city’s Pacific communities are also set to expand; they’ll account for 18% of the population, up from 15% five years ago. But the biggest increase will be in Auckland’s Asian communities, who by 2038 will make up a third of all Aucklanders.

All this population growth will change Auckland in myriad ways. To a certain extent, the city will change to accommodate the people: we will have to change the way we house a larger population, more of whom want to live closer to the city centre; we will have to strengthen our public infrastructure to allow more people to get around a growing geography; we will have to provide hospitals, schools, and parks to more people living closer together. But in other ways, the people will change the city themselves: the food that’s eaten, the languages spoken on the bus, the culture we all experience and participate in.

With all that change surrounding us, one of our key cultural institutions, our museum – Tāmaki Paenga Hira, Auckland War Memorial Museum – is changing too. As a collection of physical taonga and a repository of our collective memory, the museum is uniquely placed to help us both see and come to terms with those changes. And to ensure its centrality in our city’s cultural landscape, the Auckland Museum is a year into a five year plan to keep up with the changing city by future proofing its collection, building and operations.

“Five years isn’t a long time in the museum world,” says Auckland Museum director Dr David Gaimster. “We’ve been looking after Auckland’s heritage since the 1850s and we’ll continue to be here for another 100 years at least. When you’re talking to some of our iwi partners, they think it’s absurd that you’d plan on a five-year basis. For them, it’s about the next generation and the generation after that and the next generation. Five years is a very short horizon for an institution that’s perpetual.”

The plan’s priorities are to reach more people, grow its revenue, engage every school child in Auckland, share its collection and data to facilitate new knowledge, advance the museum’s digital presence, and transform its building and collections.

“Institutions have to change,” says Gaimster. “This city is changing. It’s growing and diversifying. This institution has always been relevant to Aucklanders and we need to be relevant to Aucklanders of the future. So we’re always changing in a dynamic that’s been set since the foundation of the city. We worry when a gallery has been unchanged for 10 years – we have anxiety about that sort of thing. So we’re just going through the next big change out which every institution gets once in a generation or so.

“We’re going to be changing out a third of our public galleries, half our public space, leveraging our digital footprint. There is no such thing as standstill in this business.”

Auckland Museum’s collection is a huge heritage asset. With over 4.5 million objects and specimens, it’s the biggest in New Zealand and one of the biggest in Australasia. Gaimster says the museum’s mission is to provide access to as many of those 4.5 million objects to as many people as possible. That means rotating exhibitions more frequently, finding new ways to present the collection, and reaching out to communities who are geographically isolated from the bricks and mortar museum. “The challenge is how to do that.”

Like Auckland itself, Auckland Museum has always been in flux. It opened in 1852, in a Grafton cottage. In 1867 it was moved to the Provincial Council Building, which had previously been home to New Zealand’s parliament, on what is now Anzac Ave. Three years later, it was moved again to the Post Office Building on Princes Street on the site now occupied by the University of Auckland. In 1876, the museum was moved to purpose-built premises just down the street, opposite the Northern Club.

In the early 20th century, a new curator began to systematically remake the museum as its popularity increased and it soon needed more and better spaces to exhibit its collection. In 1918, after combining the project with a memorial to New Zealanders lost in World War I, the Auckland City Council granted permission for the new museum and memorial to be built in the Domain and guaranteed funding of the museum out of the rates it collected from citizens. The current site, a hill called Pukekawa, was chosen in 1920 and, following an international competition to design the building and nine years of construction, the grand neo-classical building with its Parthenon-esque colonnades was completed in 1929.

The first major renovation began in the years after World War II, extending the back of the building to include memorials for over 4,000 Aucklanders who died in the war, and to make room for the museum’s growing collections. A semicircular extension at the rear of the building was opened in 1960, which included the Hall of Memories which now also includes the names of those lost in subsequent military conflicts. In 1994, the museum began 12 years of construction and refurbishment, further adding to the exhibition floor space as well as educational, administrative and visitor amenities. The new additions enclosed the previous extension’s semicircular courtyard and included the kauri-clad bowl, home to lecture theatres and presentation spaces, which appears to hover above the atrium.