You are here: Home » Articles filed under: 'News' » Article: 'TAN’s view of the big museum openings'

The Jeffrey E. Gundlach Building, named after the primary donor to the new museum. Courtesy of OMA New York.

Lee Cheshire & Tom Seymour, The big museum openings to look out for in 2023, The Art Newspaper, 4 January 2023

From the reopening of the National Portrait Gallery in London to the major expansion of the Buffalo AKG Art Museum in the US, here is our pick of new museum projects in the coming year

Museums, especially American museums, need friends with deep pockets. But when the museum previously known as the Albright-Knox in Buffalo, a former industrial city on the western edge of New York State, started trying to raise funds for an expansion, it did not expect to find a friend quite so generous as Jeffrey Gundlach. A billionaire financier living in Los Angeles, he had never before donated money to the museum but had fond memories of visiting the Albright-Knox as a child. He proposed an ambitious public-private fund-matching effort and ended up giving $65m of his own money.

Gundlach’s largesse has resulted in the initial letter of his surname being added to those of the previous big donors to create the renamed Buffalo AKG. His name will also stand proud on a large new glass-walled building, which is connected to the original 1905 neo-classical galleries by a first-floor glass bridge that winds its way around some historic oak trees. The chunky new three-storey building was designed by Shohei Shigematsu of international architecture firm OMA, and adds over 30,000 sq. ft of exhibition space, including a double-height gallery intended for large-scale installations.

Elsewhere on the lakeside campus, the courtyard in the centre of the 1962 Knox building has been glazed over in the manner of the British Museum’s Great Court. The new roof is actually an artwork, Common Sky, by Olafur Eliasson and Sebastian Behmann of Studio Other Spaces. It will be the hub of the museum’s community engagement activities, including five new state-of-the-art classrooms. The museum’s director, Janne Sirén, is eager to challenge the institution’s elitist image in a city with a 30% poverty rate. “Many people appreciate the Albright-Knox in a castle-on-the-hill way, like, ‘it’s not my museum’,” he told Wallpaper magazine. “Museums can be many things, but they have to be of, and for, the community.” 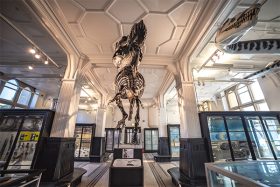 Factory International, the new contemporary art museum and cultural centre in Manchester, is named after Factory Records, the city’s historic record label founded in 1978 by the late Tony Wilson and responsible for discovering Manchester bands including Joy Division and Happy Mondays. Factory Records also ran Manchester’s Haçienda nightclub, which became synonymous with the early ‘Madchester’ movement. Located close to the city’s Old Granada Studios, the centre will span 144,000 sq. ft, with a roof looming 60ft above ground. The fully soundproofed warehouse space will have a standing capacity of 5,000 people, while a performance hall will seat 1,600. The centre will be used for art exhibitions, installations, opera, theatre and raves, as well as being the permanent home of the Manchester International Festival, which runs from 29 June to 16 July. The design has been overseen by Ellen van Loon of the Office for Metropolitan Architecture. Factory International will have a “unique flexibility” for a cultural space of its size, she says.

Before that, on the other side of the city centre, the redeveloped Manchester Museum will open in February. It has been redesigned by architectural practice Purcell and will now play host to a number of new exhibition spaces. The redevelopment is supported by funding from Arts Council England, the National Lottery Heritage Fund and the University of Manchester.

Located close to India’s so-called Silicon Valley, the Museum of Art & Photography (MAP) will be the centrepiece of Bengaluru’s new museum quarter. The museum is the creation of the Indian collector Abhishek Poddar and is designed by local architects Mathew & Ghosh. With four galleries totalling 44,000 sq. ft, the museum will house 60,000 works donated by Poddar and the private collections of the Indian businessmen Deepak Puri and Rahul Sabhnani. But MAP will not just be a home for physical artefacts; digital projects are planned in partnership with tech companies including Microsoft, Accenture and others with offices close by, in a bid to reach a generation of Indian citizens who would never be able to visit a museum otherwise.

The Grand Egyptian Museum is a regular in our Year Ahead round-ups of upcoming openings: it featured last year and in 2020. But delays have plagued this mammoth project—the foundation stone was laid 20 years ago; the Arab Spring and Covid-19 further slowed things down. But 2023 might just be the year. The museum was “99% finished” in October, and although an opening date had not been announced by the time we went to print, some preliminary testing events have been announced. At 484,000 sq. ft, it will be the largest museum in the world dedicated to a single civilisation. The 100,000 ancient Egyptian artefacts will be complemented by a view of the pyramids. Many artefacts have been moved from other places in Egypt, including a near-complete display of the objects in Tutankhamun’s tomb. When you are dealing with artefacts that are millennia old, what is a wait of a few more months? 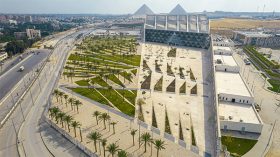 Gadsden’s Wharf, in Charleston, South Carolina, was once the largest slave port in the US. More than 40% of all enslaved Africans set foot in the country through the dock—more than 100,000 people during the peak of the slave trade. Now, the International African American Museum is set to open across from the historic dock. Spanning 150,000 sq. ft, the museum was designed by the late US architect Henry Cobb and stands on a series of 13ft-tall pillars above a memorial garden designed by the landscape architect Walter Hood. It aims to comprehensively explore the cultural and socio-economic impact of slavery. 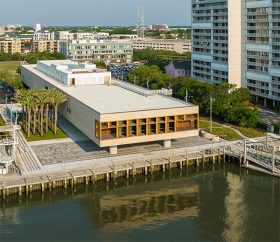 See also: The must-see exhibitions in 2023: from the biggest ever show of Vermeer paintings to a history of hip-hop