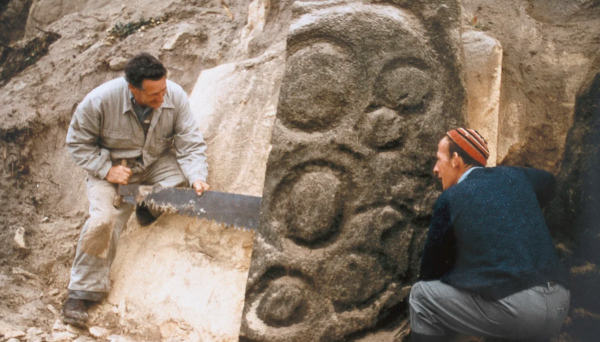 In the far north-west of Tasmania there is a strip of shore that has been returned as Aboriginal land. This is Preminghana, a wild and beautiful place. Just to the north lies Cape Grim, once the site of a notorious massacre, now better known for the purity of its air, reputedly the cleanest in the world. Wind farms adorn a nearby promontory. The turbines can be seen carving circles slowly in the air. It is a weird conjunction of the pre-European and the post-carbon. For hidden on the shore at Preminghana is the finest expression of Aboriginal art in Tasmania.

Under a heaped dune, by a small creek, lies a complex of remarkable carvings. A matrix of geometric motifs – concentric circles, drifting trellises, rows of dots, crosses, parallel lines – has been chiselled into slabs of fallen sandstone along a buried cliff face. Certain rock formations are so covered with engravings that they resemble monumental abstract sculpture. Elsewhere, tracks of a bird – thought to be the extinct Tasmanian emu – have been discovered carved into the rock. Tools of hard quartzite and basalt have also been found, perhaps the Aboriginal sculptors’ chisels.

Giants of Australian archaeology were once intensely interested in the site. Fred McCarthy, author of Stone Implements of Australia, said it was as important to the human story as the temples of Abu Simbel, then saved from the rising waters of the Aswan Dam by hundreds of millions of dollars. McCarthy was hoping for funds at Preminghana. His hopes were not realised. All that can now be seen of this great work of hunter-gatherer art is a pair of circles floating in a single block of protruding stone. The rest lies buried. It is a strange story.

Peter Sims tells the tale. He is an octogenarian former industrial chemist with hawk-like eyes who has devoted much of his life to rock art and is now finishing a work on Preminghana. At his home in a rainforested dell outside Devonport, and later in his personal archive at the Queen Victoria Museum in Launceston, Peter pulls out the old photographs and faded documents, and puts the pieces together.

A schoolteacher and amateur archaeologist made the rediscovery in 1933, after the petroglyphs were blown free of sand at Mount Cameron West, as it was then known. Archibald Meston was taken to the site by shepherds from the nearby Van Diemen’s Land Company (a pastoral concern with a bloody past in the island’s notorious Black War of the 1820s). Meston immediately recognised the petroglyphs’ significance and prepared a paper for the Royal Society of Tasmania.

This elicited the attention of a stonemason, Leo Luckman, who documented the site and removed a fallen carving in several pieces to his local museum in Launceston. Then, in 1962, the island’s leading museum, the Tasmanian Museum and Art Gallery (TMAG) arrived on the scene. Workers took a crosscut saw – generally used for logging operations – and cut off one of the finest panels, hefting the slab back to Hobart. At the time this caused real dismay in the Australian archaeological community and was deplored as official vandalism by John Mulvaney, ‘the father of Australian archaeology’, at the Australian Institute of Aboriginal Studies in Canberra.

Rhys Jones, a young Welsh archaeologist freshly out of Cambridge and soon to be a gilded name, was dispatched to the Tasmanian backwater. Together with Fred McCarthy, he did a major excavation in 1969, making fibreglass casts of the motifs. They carbon-dated material and found the carvings were at least as old as the Hagia Sophia and probably far older. Rhys Jones judged the site was abandoned to windblown sand, then soil, around 850 years ago, until cattle caused erosion.

There was talk of building a dome and seawall to protect the ancient art from the abrasive sands and waves of the Southern Ocean. Eventually, in lieu of funds, concerned locals, with a nod from the Institute of Aboriginal Studies, decided to rebury the petroglyphs in the late ’70s. The ground was seeded with marram grass and has now changed beyond recognition. In 1995 the Liberal state government of Ray Groom returned Preminghana to the Aboriginal Land Council of Tasmania. The carvings have not been sighted since.

Peter Sims is quietly incredulous as he relays this tale. At the time when the petroglyphs were reburied, Sims and others believed that in 20 years’ time there would be an “enlightened community” to protect and promote them.

“Well, it’s not 20 years, it’s 50 years,” he says. “My lifetime will pass and nothing will change. It should somehow be resurrected. TMAG holds the key.’’

Located down near the Hobart docks, TMAG is not to be confused with the city’s other museum, David Walsh’s fizzing, contemporary Museum of Old and New Art (MONA). In comparison, TMAG can seem traditional, even sedate.

Yet inside the museum can be found a willing exploration of Tasmania’s complex past. There are two galleries dedicated to the island’s Indigenous people.

According to a written statement provided by the Museum’s communications manager, Andrée Hurburgh, the petroglyph was taken off display in 2005 ‘’at the request of the Tasmanian Aboriginal community’’. Later, from annual reports it emerged that in 2011-2012, TMAG had commenced formal discussions with the custodians of the site ‘’regarding the return of the petroglyph’’. The status of those discussions is unclear.