The Tasmanian Museum and Art Gallery (TMAG) has thrown open the doors on its spectacular $30 million redevelopment.

More than 14,000 people filed through the new visitor entrance at the historic Watergate on Dunn Place during the initial reopening days.  The opening events coincided with Tasmania’s biennial arts festival, Ten Days on the Island.

TMAG Director Bill Bleathman said that while the redevelopment had been a long journey, the result had been worth the wait.

“Making a contribution to the cultural memory of our great state has been an honour that none of us here at TMAG have taken lightly,” Mr Bleathman said.

“Our collection is the broadest of any single cultural institution in the nation and is now more accessible than ever before.”

The historic waterfront museum’s renovations are the first stage of a planned, although as yet unfunded, $200m ‘redevelopment vision’ which it is hoped will eventually feature more than 2000 sq m of gallery space. 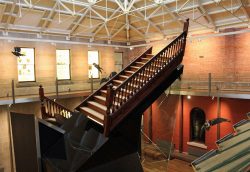 Part of the museum's new space which merges the old and new. Source: ABC Local: Carol Raabus
Positions Vacant » View All
» Exhib & Creative Services Officer – Otago Museum
» Curator (Pacific) – TMAG
Latest News » View All
WAM, UWA & Kwini TO’s explore Indonesian
trade in Kimberley pre European settlement Read more.
QMN, Homebush Mill, Mission Hall &
Aust South Sea Islander Lived Identities Read more.
NZ museums, stolen Māori remains &
a better understanding of biculturalism Read more.
Terri Janke’s “True Tracks: framework of
Aust Indigenous cultural & IP principles" Read more.
Museums can be very ‘exclusive’ places
Science Gallery's Rose Hiscock's Age lunch Read more.
Top +
Council of Australasian Museum Directors, c/o Ms Daryl Karp, Museum of Australian Democracy at Old Parliament House PO Box 3934 Manuka, Australian Capital Territory 2603 Australia, © CAMD 2021
Copyright: All information and resources provided on this website remain the copyright of the Council of Australasian Museum Directors. Permission is granted for viewing and downloading for personal and not for profit purposes. Those wishing to reproduce any materials for commercial, educational or other uses are requested to contact us.
Disclaimer: The content of this website is provided for information purposes only and is not intended as a substitute for professional advice. No claim is made as to the accuracy or authenticity of the content of the website. The Council of Australasian Museum Directors does not accept any liability to any person for the information or advice (or the use of such information or advice) which is provided on this website. The information on our website is provided on the basis that all persons accessing the site undertake responsibility for assessing the relevance and accuracy of its content. No responsibility is taken for any information or services which may appear on any linked web sites. Hostgator.
.