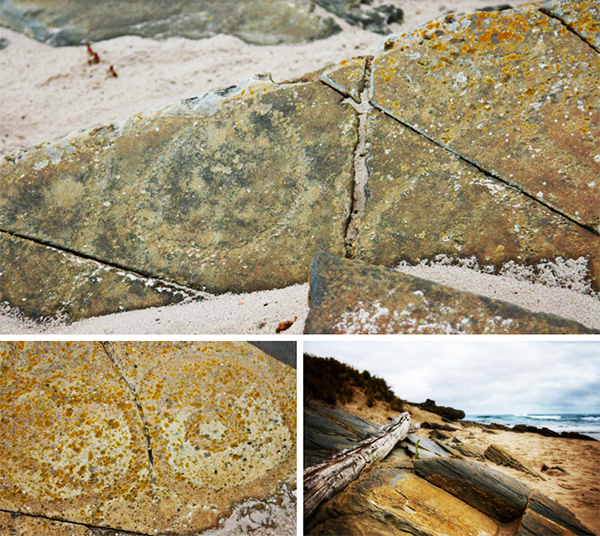 On an island at the bottom of the world, there’s been an art heist.

The coastline on Tasmania’s north-west is so windy that the white-capped waves push massive clumps of seaweed onto the rocky beach.

Victor Ralph — a pakana, or Tasmanian Aboriginal, ranger — is on his hands and knees as he dusts sand off a large piece of sandstone, uncovering the faint remains of a circle that has been carved into the rock by his ancestors.

“These petroglyphs have probably been around for longer than 40,000 years,” he says.

The ancient rock carvings are priceless to Tasmania’s Aboriginal community, but someone has stolen one.

It is an unsolved crime that Australian Federal Police (AFP) have investigated all the way to the USA.

The theft — involving the black-market sale of the ancient carving — began 21 years ago.

The AFP says the petroglyph was probably stolen from Sundown Point, in Tasmania’s north-west, sometime between October 11 and 15 in 1998.

In a meticulously executed act, the thief cut away an entire section of rock, choosing exactly which one of the many petroglyphs they would steal.

Palawa woman Sharnie Read wants the person who bought the rock on the black market to return the engraving.

“We know that the stealing of the art coincided with what’s called a ‘swap meet’ of heritage artefacts that was run in Sydney at the same time, so it just seems like a coincidence that we had some of our ancient art stolen and removed,” she says.

The stolen petroglyph isn’t the only rock art Ms Read is trying to get returned.

Together with her colleague Andry Sculthorpe from the Tasmanian Aboriginal Centre, Ms Read has started meeting with the Tasmanian Museum and Art Gallery (TMAG) to organise the return of a large petroglyph that was taken from nearby preminghana by archaeologists in 1962.

Preminghana is 38 kilometres north of Sundown Point and contains 500 hectares of land that was officially handed back to the Aboriginal community by the state government in 1995.

The process of getting that rock back is mired in politics.

But the case of the person who stole the petroglyph from Sundown Point in 1998 is simple — it’s a crime.

‘We lost the trail’

Details of the stolen petroglyph are now held on Interpol’s stolen works of art database.

The AFP had collected crime scene photos, soil and rock samples from the rugged coastline where it was stolen.

A worker on the ferry that links the island state of Tasmania to mainland Australia reportedly saw a slab of rock on the backseat of someone’s car.

They had no idea that it was a priceless artefact until it was gone.

The police searched Australia for the petroglyph, investigating rock, mineral and gem dealers.

The AFP suspected the engraving had been taken overseas, so they started searching the United States.

According to Tony Brown — the former senior curator of Indigenous cultures at TMAG — it is believed the petroglyph was stolen for a rock art sale. 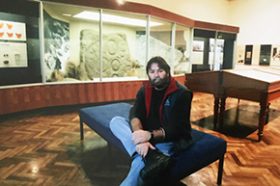 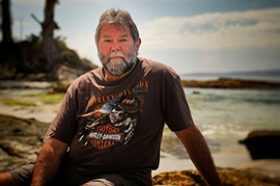 “After America we lost the trail,” he says.

The Interpol listing is still active, but the AFP says its attempts to find the stolen petroglyph in the US have been “unsuccessful”.

‘That’s where we came from’
The person who has the stolen petroglyph may not understand what they are holding.

Even for the palawa people of Tasmania, the circles are mysterious.

Mr Brown, who is also a pakana man, says the symbols represent many things.

Some look like the Moon and Sun, and that is linked to spiritual beliefs.

He points to the sky and explains: “Aboriginal people, according to creation stories, that’s where we came from — up there as opposed to walking across the land bridge [from mainland Australia].”

The rock may also be older than the illegal collector realises.

The State Government says the petroglyphs were carved more than 3,000 years ago.

Archaeologists have carbon dated campfire ash near the petroglyphs to come up with the date.

But Mr Brown says you can not date the rocks that the petroglyphs are carved on.

Tasmania’s Aboriginal community believes it is some of the oldest rock art in the world.

Mr Brown says some petroglyphs were found in the water, meaning they were carved before sea levels rose after the last ice age more than 10,000 years ago.