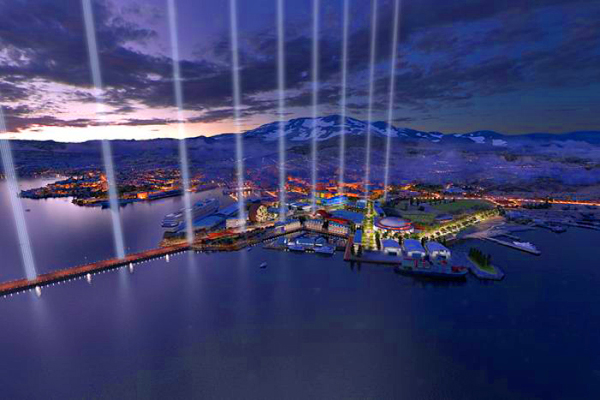 Will Hodgman concedes the Macquarie Point concept could take up to 30 years to build. Supplied: Fender Katsalidis Architects rush\wright associates.

Hobart Lord Mayor Sue Hickey has said she does not want a proposed Aboriginal memorial for the city to be a “guilt-ridden” place, adding that she “didn’t kill Aborigines”.

The Museum of Old and New Art (MONA) has announced plans to transform the industrial site at Macquarie Point into a cultural precinct highlighting Tasmania’s Aboriginal history.

The $2 billion proposal vision includes a “Truth and Reconciliation Art Park” that acknowledges Tasmania’s colonial conflict with the Indigenous population.

The Macquarie Point concept, which Premier Will Hodgman conceded could take up to 30 years to build, features a major fire and light installation dedicated to celebrating 40,000 years of continuous culture and a Tasmanian Aboriginal history centre.

The idea is the brainchild of MONA founder David Walsh and creative director Leigh Carmichael.

Alderman Hickey told 936 ABC Hobart she welcomed MONA’s vision for the precinct but was concerned the strong focus on Tasmania’s Aboriginal history could result in it being a “guilt-ridden” place.

“I would like to see [the proposal] really thoroughly consulted with the community and with the Aboriginal community, because I wouldn’t like it to be tokenistic,” she said.

“Whether they want this to be a shrine, [or] equally if it’s just a place where they can explain their culture and show off some of the things that they do that are very significant to them, well I’d be very supportive of that.”

“It’s a place where we just simply acknowledge a tragedy that happened 200 years ago.

“Whatever happened 200 years ago is really, really sad, but lots of atrocities have happened. People came away here in ships, torn away from their families for stealing a turnip.”

Ald Hickey said people today should not be blamed for the atrocities of the past.

“I didn’t kill the Aborigines, and nor would I; it was a different era,” she said.

Premier Will Hodgman said Ald Hickey did not need to apologise.

“This is exactly what we expected, a conversation off the back of a bold and brilliant vision,” he said.

“Of course governments and the broader community always want to be looking forward, but it’s hard to ignore our past and people have different perspectives and they categorise things in ways that are relevant to them.

“I think Sue Hickey’s comments don’t represent what most Tasmanians feel about recognition for the traditional owners of Tasmania’s land and what they went through,” he said.

“If we can’t learn from the past it doesn’t say much about our society.”