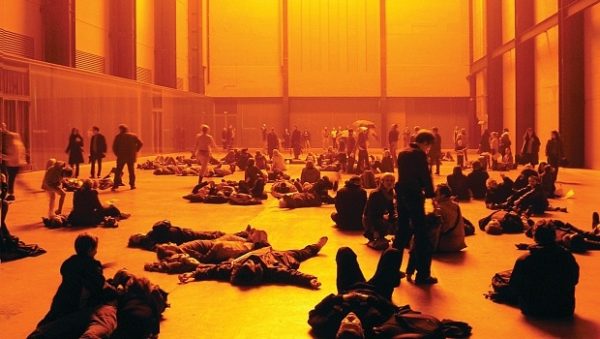 Bruce Altshuler, Tate Modern: a museum for our times, The Art Newspaper, 15 June 2016

The Turbine Hall at Tate Modern is perhaps the most well known, and probably the most photographed, space in the world of contemporary art. A striking feature of a great example of 20th-century industrial architecture, it has hosted the important Unilever (and now Hyundai) series of large-scale installations since the museum opened at the Millennium. But as you enter Tate Modern what you initially experience is not so much particular artworks as an impressive space. In the public imagination, what Tate Modern first presents is the dramatic setting for a contemporary art experience.

In 1990, the art historian Rosalind Krauss described this situation as characteristic of the late capitalist museum. Reflecting on an exhibition of the Panza Collection of Minimalist sculpture, she noted that the object of her perception did not seem so much to be the art itself, but to be the museum as a building. In an age of “starchitecture” this might not be surprising, but her analysis had more to do with the developing character of museums than with their architectural notoriety. For what Krauss observed was a departure from the traditional museum’s intention of providing an art-historical narrative. Rather, what she saw museums now seeking to deliver was a certain kind of spatial engagement. And to produce that experience spaces of great size were needed, such as those planned by Guggenheim Museum director Thomas Krens for MASS MoCA, which opened in western Massachusetts the year before Tate Modern.