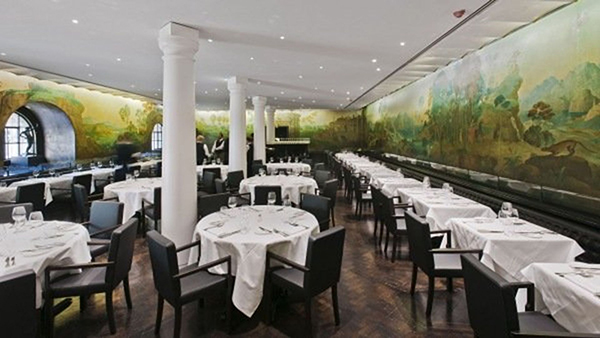 Rex Whistler’s The Expedition in Pursuit of Rare Meats (1927) has been the backdrop for Tate Britain’s restaurnant© Tate Photography.

Tate is to commission a contemporary artist to create a “site-specific installation” in what was until recently the Rex Whistler restaurant. The gallery admits that the mural at Tate Britain includes “racist imagery”.

Rex Whistler painted the mural in 1927. Although completed when he was just 21, it remains one of his most important artworks.

Entitled The Expedition in Pursuit of Rare Meats, the mural tells the story of an imaginary hunting trip through continents and epochs in search of exotic food and drinks—an appropriate subject for a restaurant.

There are two vignettes which a Tate statement categorises as “derogatory and distressing imagery of a Black child being kidnapped from his mother and enslaved, and caricatures of Chinese figures”. These images represent a tiny percentage of the mural.

Until the late 2010s little attention had been paid to these two scenes, but in 2018 Tate presented a new explanatory text addressing their racial content. Two years later, following further protests, the trustees decided that it was no longer appropriate to use the room as a restaurant. By this time the gallery was closed because of Covid-19.

Tate then set up a group to oversee what became known as the Rex Whistler Mural Discussions, involving consultations with outside artists, art historians, cultural advisors, civic representatives and young creative practitioners.

The group is led by five key members, who are all co-chairs. This suggests either a strong commitment to collaboration or that questions arose on who should lead the discussions.

All of the group’s co-chairs are people of colour apart from Tate Britain’s director Alex Farquharson. He comments: “The mural is part of our institutional and cultural history and we must take responsibility for it, but this new approach will also enable us to reflect the values and commitments we hold today and to bring new voices and ideas to the fore.”

The co-chairs clearly found that responses in the discussions had been challenging, judging from the quotes in today’s Tate statement. David Dibosa, from the University of the Arts London, admits that the discussions with those consulted had “not been easy”. Amia Srinivasan, a University of Oxford professor, speaks of “deep disagreement” in the conversations.

Two other members were Tate employees. Mark Miller, the head of learning, says there were “difficult conversations”. Rachel Noel, who is responsible for Tate’s links with 15-25 year olds, stresses that “young people want to see museums take ownership of their difficult histories and explore how the past relates to our future”.

Tate’s trustees had already acknowledged that the mural is a work of art. It reflects attitudes towards race and empire of a century ago, but as an artwork it cannot be removed, damaged, obscured or closed off permanently. Although the mural is not a formally accessioned work, it forms an integral part of a Grade I-listed interior.

Earlier this month the trustees accepted the advice of the Rex Whistler Mural Discussions. This advice is that a contemporary artist should be “invited to create a new site-specific installation in the room, which will then be open to visitors as a display space”.

The new work “will be exhibited alongside and in dialogue with the mural, reframing the way the space is experienced”. It will also be accompanied by “new interpretative material, which will critically engage with the mural’s history and content, including its racist imagery”.

Tate is now starting the process of selecting a contemporary artist for the commission. No details have been released, but it will almost certainly be a non-white artist, probably one based in the UK. Although Tate is unwilling to discuss names, one possibility might be Lubaina Himid, who was born in Zanzibar and brought to Britain as an infant (she currently has a major exhibition at Tate Modern, until 2 October).

The selected artist will face a challenge in dealing with the two offensive sections of the mural. One option would be to temporarily obscure them by screening them off in a way that does not damage the mural. The opposite approach would be to literally spotlight the three vignettes, to draw attention and then comment on them. Another idea would be to cover the offensive sections with a transparent overlay, possibly with an additional image or text. But there will no doubt also be other approaches.

The problem is that the recent notoriety of the mural means that it will attract a vastly greater number of visitors than when it was a restaurant—increasing the visibility of the offensive images.

The name of the commissioned artist is due to be announced in a few months. Tate then hopes that the Rex Whistler room will be reopened with its new artwork and explanatory panels in the winter.

Farquharson tells The Art Newspaper: “There are many ways an artist might approach this commission, which would likely be influenced by their own practice and ways of working. We’re looking forward to seeing what ideas are proposed and the direction this takes us in.”