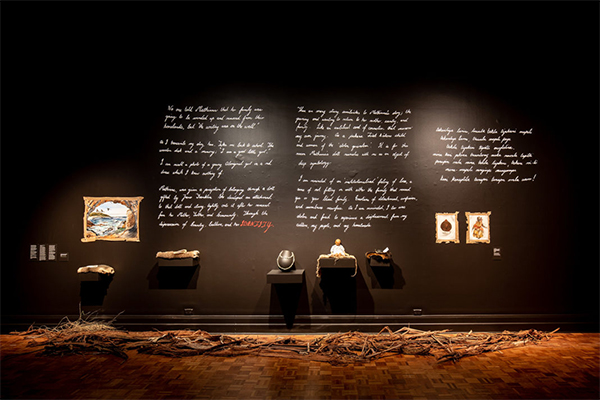 The Tasmanian Museum and Art Gallery has launched taypani milaythina-tu: Return to Country, an exhibition which features responses from 20 Tasmanian Aboriginal artists and cultural makers to stories of ancestors and their cultural objects held in institutions around the world.

The exhibitions aim is to facilitate Aboriginal reconnection with cultural objects that left the island in colonial times, as well as develop relationships with institutions external to Tasmania.

Exhibitors include Zoe Rimmer, a pakana woman from a large extended family from Flinders and Cape Barren Island with ancestral connections to the north east coast of Tasmania who also works in TMAG’s cultural heritage management sector. 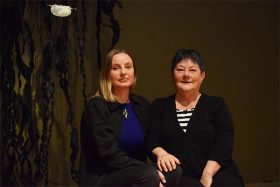 “I have personally had the unique experience of visiting precious cultural material in collection stores, but this is a privilege that many in our community cannot share,” she said.

“To be able to bring some of our most unique cultural heritage material home through taypani milaythina-tu is an incredible opportunity for reconnection and healing.

“The possibilities to help revitalise and inspire cultural practices from this type of engagement are endless.”

The project has been led by TMAG’s First Peoples Art and Culture team, who have sourced Tasmanian Aboriginal cultural objects for the exhibition from as far away as Europe and North America.

First Peoples Art and Culture team curator Julie Gough said the return of the cultural objects from many afar institutions was significant for Tasmanian Aborignal people and could act as a precursor for further returns. 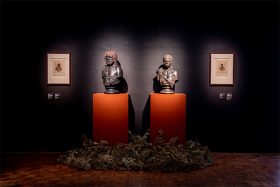 “The cultural material returned on loan for this exhibition is a small example of our globally dispersed cultural heritage, and there is much work still to be done,” she said.

“Musée du Quai Branly in Paris and the British Museum in London hold the oldest surviving rikawa (kelp containers), whilst the Field Museum in Chicago holds a unique cordage necklace, and Pitt Rivers Museum in Oxford holds the only known model reed canoe.

“Long-missing shell necklaces, twined baskets, wooden, stone and bone tools, domestic objects and artworks have returned to lutruwita from the Victoria and Albert Museum in London, the National Museum of Scotland, Edinburgh, the University of Cambridge Museum of Archaeology and Anthropology, Cambridge, the World Museum in Liverpool, and the Derbyshire Record Office in Matlock.”

“These objects join those sent from Museums Victoria in Melbourne, the Queen Victoria Museum and Art Gallery in Launceston, Libraries Tasmania, the Royal Society of Tasmania, and the National Gallery of Australia in Canberra, as well as some held in TMAG,” she said. 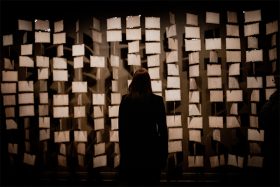 “We are so pleased to be presenting not only the ancestral objects on loan, but also the array of contemporary artworks the 20 Tasmanian Aboriginal artists have created in response,” she said.

The response artworks include paintings, sculptures and audio / video instillations, all which present a reconnection between Tasmanian Aboriginal people, objects and Country.

The exhibit was opened by a weekend of talks from Tasmania Aboriginal artists featured in the exhibition and curators from international institutions.

Cheryl Mundy tremanya – If These Walls Could Talk (group work)

Jillian Mundy – If These Walls Could Talk (group work)

Positions Vacant » View All
» Collections and Database Administrator – QVMAG
» Team Leader Learning & Engagement – QVMAG
Latest News » View All
AWMM’s Secrets of Stonehenge
- secrets explained – mystery remains Read more.
The half-formed idea of Aus: Julianne Schultz
on the importance of recognition Read more.
QMN’s World Science Festival & Curiocity
2023 incl Meganne Christian & Brian Greene Read more.
TAN on global issues of object restitution
incl France to modify patrimony code Read more.
Frank Bongiorno on Aus Ntl Cultural Policy
- hip, popular, commercial & democratic? Read more.
Top +
Council of Australasian Museum Directors c/o Lynley Crosswell, Museums Victoria, GPO Box 666, Melbourne VIC 3001, © CAMD 2023
Copyright: All information and resources provided on this website remain the copyright of the Council of Australasian Museum Directors. Permission is granted for viewing and downloading for personal and not for profit purposes. Those wishing to reproduce any materials for commercial, educational or other uses are requested to contact us.
Disclaimer: The content of this website is provided for information purposes only and is not intended as a substitute for professional advice. No claim is made as to the accuracy or authenticity of the content of the website. The Council of Australasian Museum Directors does not accept any liability to any person for the information or advice (or the use of such information or advice) which is provided on this website. The information on our website is provided on the basis that all persons accessing the site undertake responsibility for assessing the relevance and accuracy of its content. No responsibility is taken for any information or services which may appear on any linked web sites. Hostgator.
.