September 30th, 2022 | Browse other: News. | Tagged with: Is Wellington a cool creative and cultural city?, Te Papa as Wellington’s highlight | 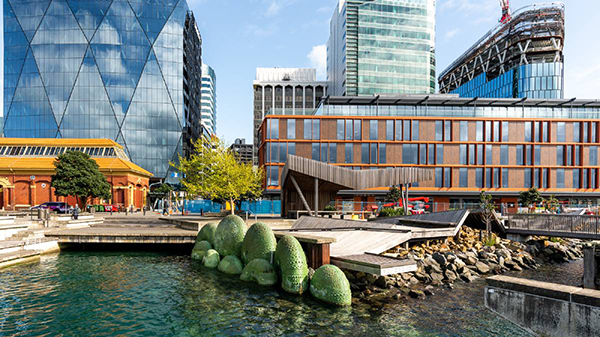 While exploring the excellent Wellington Museum, housed within an historic 1892 warehouse along the waterfront, I pause to watch a video at one of the exhibits. Playing on a screen is an advertisement released in 1991 called “Absolutely Positively Wellington”, part of a campaign initially designed to bring some pride to a struggling city, which was expanded to encourage tourism, and ultimately adopted as Wellington’s official slogan.

There’s no doubt it worked. Or, at the very least, was a precursor to a revival in New Zealand’s capital that, 30 years later, has become a city to be proud of – cool, creative, cultural – perfect for a long weekend visit and with enough to justify staying even longer.

Visitors would do well to start along the waterfront, where there’s much more than just the Wellington Museum. This old industrial district, redeveloped into a modern precinct, showcases the best of the city’s story, with a boathouse for functioning Mori canoes (waka) adjacent to the Hikitia Floating Crane that worked the docks here for more than 60 years. Throughout the waterfront, sculpture pieces have been created on (and within) its paths and bridges, the New Zealand Portrait Gallery and City Gallery present regularly changing exhibitions, Sundays see a harbourside market with dozens of food vans, and launch points for kayaks give you easy access to the water itself. 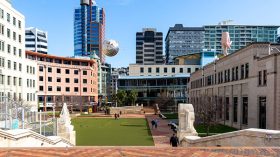 Walking from the waterfront into the city past the City Gallery. Picture by Michael Turtle.

But the highlight of the redevelopment (if not the whole city) is the incredible national museum known as Te Papa. Over six floors, the country comes to life in the interactive exhibitions about New Zealand’s nature and its connections to the world of the Pacific, the halls hung with the nation’s premier art collection, and the emotional journey through the Gallipoli campaign, which features enormous lifelike models created by the Wt Workshop, the Wellington special-effects company famous for its involvement in the Lord of the Rings movies. With so many dazzling sections, it’s perhaps no surprise this is the southern hemisphere’s most visited museum (sorry, Australia!). 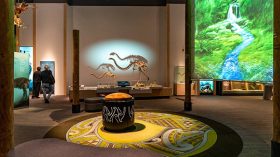 Inside the Te Papa museum. Picture by Michael Turtle.

As much as the water defines the shape of Wellington, so do the hills that surround the city, their turrets of green a gentle fortress around the urban centre. And near the top of the historic cable car that leads up into the western hills, you can reach one of their most important protectees, the wildlife sanctuary of Zealandia. In the valley here, an 8.6-kilometre-long pest-proof fence surrounds a huge 225-hectare swathe of the valley that is being returned to how the l 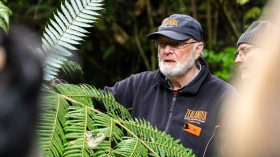 “We think of it as a 500-year project that we’re about 25 or 30 years through,” volunteer guide Roy Sharp tells me.

You can hike the trails yourself, through forests of native plants, exploring the haven for native birds, insects, and reptiles. But I would recommend a guided tour to help you spot and identify the most important species that now live here without fear of foreign predators. 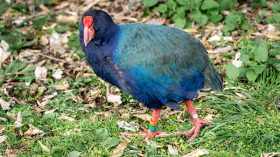 An endangered takahe bird at the Zealandia natural sanctuary. Picture by Michael Turtle.

In the afternoon, I join another guide, this time Mike Henderson from Craft Beer Tours. Wellington’s creative scene has manifested in many ways and in recent years it’s earned a reputation as New Zealand’s craft beer capital. Bubbling away in more than a dozen small city breweries are beers like hazies, IPAs, stouts, many featuring local ingredients like feijoas and even cacao beans from the inner-city Wellington Chocolate Factory.

“I think that’s a really good example of what Wellington is – experimental and adventurous, just like our beers,” Mike says.

And friendly, I would add. Because as Mike leads me to three nearby brewpubs in the city centre, each offering a different experience from casual cool to Indian tapas, the owners or brewers come over for a chat, something that apparently happens on all his tours. 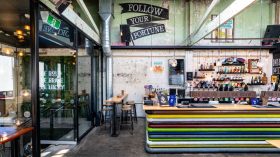 But if there’s one thing that has recently put Wellington on the world stage – or, should I say, screen – it’s the movie business, particularly The Lord of the Rings and The Hobbit films. While most production happens behind studio doors on the Miramar Peninsula, you can rub shoulders with orcs and dwarves at Weta Workshop, which created many of the props for Peter Jackson’s trilogies, along with more than 50 other movies.

A guided tour takes me through the warehouse rooms with many of the real effects – touching animatronics and prosthetics, exploring miniature cityscapes built for the Thunderbirds, posing for a photo with Gandalf, and even learning the secrets of how you go to the toilet in a Green Goblin suit (the answer? Lots of zippers!). It’s a fascinating insight into an industry that’s had a big impact on why Wellington has become so cool. 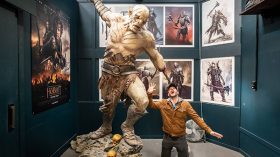 The food scene has also been a large part of the renaissance and, amongst all the tours, I find time to try a range of excellent restaurants: from hip breakfasts (Neo Café), to European comfort food (Field & Green), with Middle Eastern share plates (Kisa), and fine dining (Atlas). Along with the brewpubs, there are also small bars like Noble Rot and Kuikui Lane for a drink before or after dinner.

As I leave after four nights in the city, I’ve managed to get to most of the highlights, even finding time to wander around the parliamentary district. Yet it still feels like there’s more I could be doing – and certainly more I could be eating and drinking! Would I come back? Absolutely, positively.