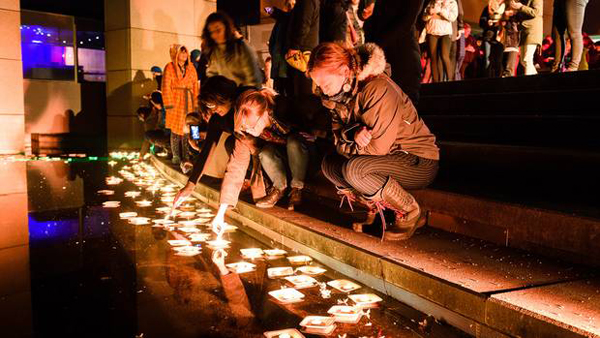 Candles are lit and placed in the water to remember lost loved ones. Photo:Kate Whitley, Te Papa.​ NZ Herald.

Te Papa museum is calling for Matariki to be celebrated by all Kiwis as an indigenous event of national identity.

Matariki, sometimes called the Māori New Year, is celebrated when the star cluster known as Matariki rises in the sky during winter.

Beyond the museum’s walls, Te Papa wants to see Matariki celebrated by all New Zealanders, as a unique expression of national unity.

“I think people are looking for an expression of national culture – an event of national unity across the diversity of the country,” said creative director of Te Papa’s Matariki programme, Dr Charles Royal.

“Let’s shape Matariki into such an event – for all, by all, with elements inspired by our indigenous Māori culture.”

Matariki traditionally marked the end of a lunar calendar year – according to Maramataka, the Māori lunar calendar – and the beginning of a new year. For this reason, Matariki like all cultural new year festivals around the world, has a primary theme of renewal.

“Traditionally, fires were lit and food was cooked on these fires. It is said that the aroma from the cooked food would be a conduit to release the spirits of loved ones who had died in the year gone by,” Royal said.

“It is said that Matariki would descend from the skies and partake of the food and be nourished. Nourishing the stars, nourishing the universe.

“Today Matariki provides an opportunity to come together, to remember those that have passed, to celebrate one another and to express our hope and aspirations.

“It’s also an opportunity to connect with the nature and the cycles of the natural world.

“Yes, it would be great to have it marked by a national holiday, but what is more important is that we take the time to acknowledge who we are and to express love for these islands that we call our home.”

What Kiwis think about Matariki

In 2017, Te Papa conducted research with a nationally representative sample of 1000 New Zealanders over the age of 18 to find out about public understanding and participation in Matariki nationally.

The study revealed that Matariki has a solid base of awareness within NZ, with 69 per cent of the overall population aware of it. Other events such as Chinese New Year are still significantly better known.

“This isn’t surprising. Matariki celebrations among Māori tended to drop away in the 1930 and 40s,” Royal said.

How to celebrate Matariki at home

“We want to encourage people to celebrate Matariki either at home and or as part of community event themed around renewal. It’s easy and fun and just what is needed during the cold winter months,” Royal said.

“We’re celebrating Matariki at Te Papa from Friday 15 to Sunday 24 June, 2018, and we’ll kick off the celebrations with a community ritual for the whole family – it was really incredible last year and we had a capacity crowd,” Royal said.

The ritual, centred around a fire where storytelling will take place, will be held in Te Papa’s amphitheatre on Friday 15 June at 7.30pm. Stories will include the Māori creation story and the story of Tāne who adorned the heavens with stars. Lights will be placed on the pond to farewell loved ones, and aspirations will be gathered in a community basket.

Other Te Papa activities will include an art project headed by internationally-acclaimed NZ artist Michel Tuffery who will work with selected Wellington secondary school students. The art work, which is inspired by the rising of the Matariki star cluster, will be displayed on the Te Papa store windows.

Now in its 10th year, it will be an opportunity to celebrate haka and waiata with more than 450 senior Māori performing artists from around Aotearoa.