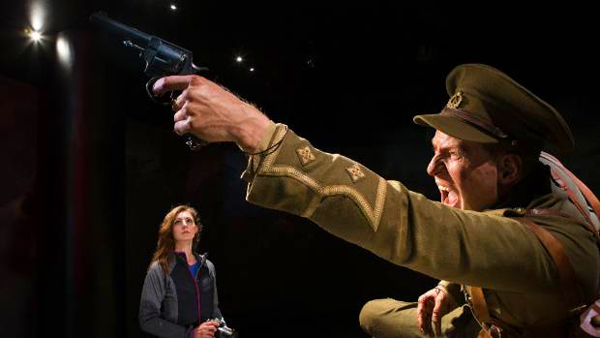 Dutch visitor Antoinette Sneeboer, 18, looking at the Lieutenant Spencer Westmacott display at Gallipoli, The Scale of Our War exhibition at Te Papa. – a free exhibition.

A promised investigation into charging international tourists to enter Te Papa has been quietly shelved.

This leaves Kiwis picking up much of the tab for keeping the museum, which had a $6 million deficit and got almost $30m central government funding last year, afloat.

The national museum’s current budget said charging international tourists was worth consideration but a spokeswoman said the idea was not being considered and a report into the idea had been ditched.

In the last financial year, 43 per cent – more than 650,000 – of Te Papa’s 1.578 million tourists were from overseas and, with the exception of paid exhibitions,  did not have to pay a cent to enter.

Outside of Te Papa on Wednesday, tourists said they would be happy to pay to enter – though appreciated the fact it was free.

“I think it is very nice if you don’t have to pay,” Maelle Gamdilhon​ from France said. “We don’t have that anywhere in France.”

Te Papa – earlier this month, then again in response to an Official Information Act request – was adamant that while charging foreigners was considered “from time to time” it had no current plans to do so.

Te Papa released excerpts from board reports – including from its current budget – showing the idea of charging tourists had been floated four times since February, 2016, but it refused to release the full reports or context around the mentions.

The most-recent of those mentions was the 2017-2018 budget  which placed the idea of charging international visitors as a “long-term consideration” with many virtues.

“This should be considered as part of the long-term financial plan,” it said.

A paper to the board in May 2016 said the museum was considering “innovative ways to grow commercial revenue and alternative funding streams to fund our ambitious work programme”.

It said a full business case investigating the idea of charging international tourists would be “developed, costed, and benchmarked” then brought back to the board.

Te Papa had not done any financial modelling on charging international tourists and was always looking at new ways to make money, Camp said.

“We are focusing on other new sources of income, for example our new behind-the-scenes tours.”

Te Papa’s most recent annual report shows that $29.5m of its $58.1m annual budget for the last financial year came from the central Government. It had a $6.1m deficit for the year.

Te Papa’s official information response also shows the May, 2016, mention of charging almost mirrored one on the 2016-2017 budget approval saying charging international tourists was an option to fund its “ambitious” programme.

In February, 2016, Te Papa’s commercial strategy to the board had a bullet point: “Charge for international visitors.” But, according to Camp, there was no further mention of the idea.