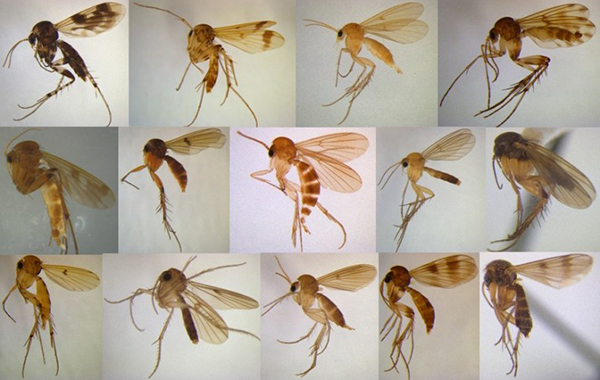 Assistant researcher Shaun Thompson is working with Lead Curator Invertebrates Julia Kasper studying the lives of fungus gnats, one of the biggest Diptera groups in New Zealand. They aim to provide updated species descriptions and distribution records which may help detect invasive exotic species present in New Zealand, prevent the loss of these gnat species and avert harm to our ecosystem.

Fungus gnats in New Zealand are an unexpectedly diverse group of flies.

However, they are only a few millimetres in length and easily go unnoticed by most people. The gnats lay eggs in fungus, which then hatch into larvae. The larvae feed on the fungus until they become adults. Although they are diverse, we know very little about their ecology.

Because of their interaction with fungus, these gnats are important in the decomposition process. The fungus feeds of decaying material, then the gnat larvae feed on the fungus.

Once they become adults, the gnats release the energy from the fungus into the ecosystem when they get eaten by other animals such as birds.

Our research focuses on fungus gnats from the Mycetophila genus. This is one of the most common groups of fungus gnat in New Zealand and can be found almost everywhere in the country. Our country hosts over 50 endemic species of Mycetophila. 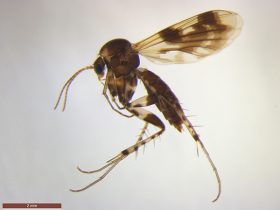 Despite the prevalence of this group in New Zealand, the last taxonomic revision of Mycetophila was in 1927 – almost an entire century ago! Because of this, many of the original specimens that were used to describe the species have been lost or destroyed.

Also, many of the species descriptions are missing important details and lack colour photographs, which makes identification more difficult.

Another problem with previous studies is that fungus gnats in many regions of New Zealand such as Taranaki, Northland and the Coromandel have no data. This has limited understanding how these species are distributed throughout the country. Additionally, these regions may also harbor undescribed species that are waiting to be discovered.

In response, we are undertaking a research project that aims to provide updated descriptions with colour photographs of every species of Mycetophila.

We are also creating an interactive species identification guide that will be freely available to everyone, and we’re collecting specimens from the regions with no records in the hopes of fully recording the distribution of these species.

The Lucid interactive species identification key will enable even inexperienced users to identify the species of Mycetophila.

The key contains several of the flies’ morphological features such as the presence or absence of markings on the wing or the number of spines on the legs. 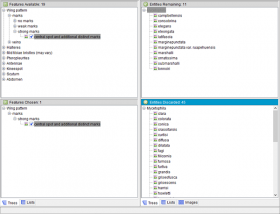 A sneak peek at the interactive key. Image by Shaun Thompson. Te Papa.

To establish the Mycetophila distribution records, we are using historical museum records and collecting new specimens from many locations.

Decades-old specimens from Te Papa and other collections – such as those at Manaaki Whenua Landcare Research and the Canterbury Museum – have been examined so we can fully document the known records of these flies. Materials from private collectors throughout the country have also been examined.

To collect new specimens, for example, field trips to Ohakune and Taranaki have been undertaken, with plans to visit the Fiordland, Coromandel and Northland regions underway.

When we reach the collection site – ideally a place with plenty of dense vegetation – we use traps called ‘malaise traps’ to collect our flies. These are shaped like tents and traps the flies by leading them into a funnel which they cannot easily escape out of. 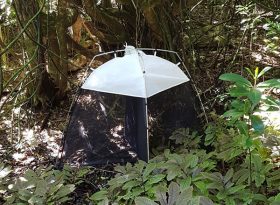 A malaise trap set up in the bush. Photo by Shaun Thompson. Te Papa.

There are several reasons why we think it is important to put Mycetophila species back on the radar.

Firstly, without proper species descriptions and guides, we may not be able to distinguish native Mycetophila from harmful exotic gnats that threaten our delicate ecosystems.

Secondly, if we can effectively identify and count the number of Mycetophila species, they may act as a useful indicator for the health of forest ecosystems. This may allow us to detect when ecosystems are out of balance.

Finally, Mycetophila seem to be important pollinators for the spider orchids, if we want to conserve these native orchids, it will be useful to know which species pollinate them.