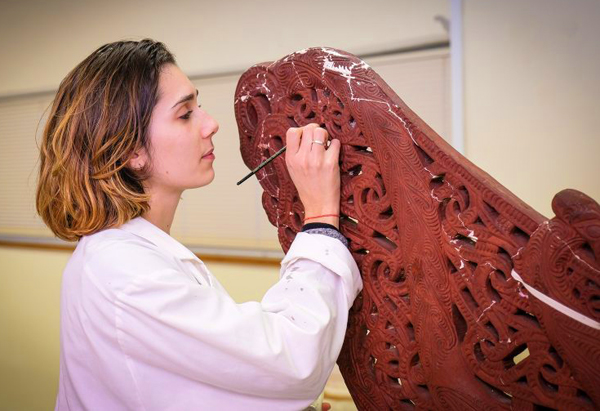 Charlotte Jimenez, Putting the pieces back together after the earthquake, Te Papa, 11 July 2017

On 14 Nov 2016 an earthquake registering 7.8 on the Richter scale shook Wellington awake.

All-in-all Te Papa’s buildings and its collection were virtually unscathed. Out of over two million collection objects, only nine were damaged.

One of the damaged objects was a plaster cast replica of an 18th century tauihu (canoe prow).

Charlotte Jimenez, an intern from the Institut National du Patrimoine in Paris, has spent the last three months putting more than 250 pieces of the plaster tauihu back together. Here she explains the intricate process.

Why we’re repairing a ‘replica’

This plaster cast replica of a tauihu (canoe prow) was sent to New Zealand in 1909. Based on style, we believe that the original was produced in north Auckland’s Hokianga district in the 18th century.

Although the plaster cast is a replica, the story behind the piece makes it a taonga itself, and an important part of Te Papa’s history.

Between 1903 and 1913, Augustus Hamilton, director of the New Zealand Dominion Museum asked for several plaster casts of taonga Māori preserved at the British Museum, and the tauihu was one of them. The cast therefore represents one of the first real attempts from New Zealand to repatriate taonga from Europe back to Aotearoa.

Working on this project was particularly interesting for me because of the link I felt between 19th century European collecting and exchange, and how Māori communities have worked to ‘repatriate’ the taonga from this time.

This project was a big technical challenge for me. It required much consideration before starting the treatment. I’d already pieced together a few works but not at this scale.

I knew it was going to be a long, fiddly process, and I was confident that we could stabilise the plaster cast by putting the pieces back together. But I was worried about it shifting and whether I would be able to correct the distortion and bring the tauihu back to its original shape.

But mainly I was just excited to get started.