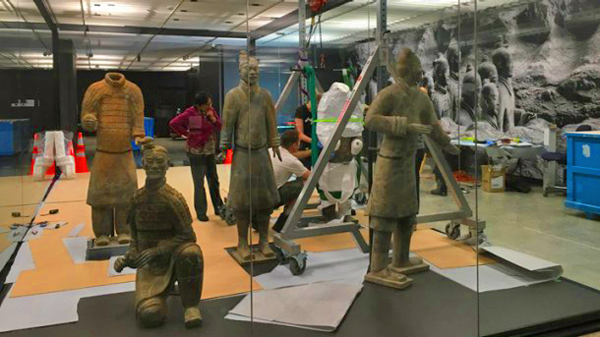 A group of ancient warriors have landed in New Zealand after completing a 10,000-kilometre journey from their home in Xi’an, China.

It’s believed these warriors have never been on New Zealand soil, although fellow members of their infantry have visited twice before, first in 1986.

For the next five months, their home will be at Wellington’s Te Papa national museum, with the public able to visit from December 15.

Ms Rice said she wants the public to be “wowed” by the eight larger-than-life terracotta soldiers and two full-size horses.

“The warriors remained undiscovered for about 2000 years after the death of the first emperor [Qin Shi Huang], so in 1974, some peasants digging a well 1.5 kilometres from the emperor’s tomb mound came across some shards of pottery and they didn’t know quite what they’d found.

“But they notified the authorities and an archaeologist jumped on his bike and raced out there and realised it was a significant find.”

Most of the soldiers are broken, with on-site conservators tasked with “putting this jigsaw puzzle back together” and binding them, Ms Rice said.

The soldiers’ bright colours disintegrate quickly once they’re excavated, with work ongoing to find a way to keep the paint preserved.

While the emperor’s mausoleum has never been excavated, approximately 3000 of the terracotta soldiers tasked with guarding his tomb have been, with an estimated total of 8000.

Securing the artefacts’ visit has been a long journey, with trips between the two countries by Te Papa staff and the Shaanxi History Museum staff part of the two-year negotiation process.

The items were transported to New Zealand by plane in large boxes with the soldiers’ official guardian keeping a watchful eye.

Zhang Zheng has travelled to more than 20 countries with the warriors, with exhibitions being held in South Africa to Japan, Belgium to the United States.

With Wellington posing an earthquake hazard, Te Papa mountmakers have created mounts that go around the waist of each soldier that would transfer movement towards the ground during seismic activity.

Mountmaker Callum Strong said, “We have to consider the height, their size, their toppling point”.

Working close to the ancient pieces, Mr Strong said he’s been struck by the individuality of each warrior.

“You start to appreciate the finer details – the print on the bottom of the sandal, the comb lines through the hair, the individual expressions on their faces – and that’s when you start to connect with the artistry of the people and perhaps even their personality a long, long time ago,” he said.

“We can never attempt to replicate the spectacle of being in Xi’an – that’s a very different experience, so with the parameters around the exhibition-making we have, we’re really focusing on that intimate to close-up look,” Ms Rice said.

The oldest artefact in the collection is a 3000-year-old bronze tiger created during the Western Zhou dynasty.

“Every time I look at it, I just imagine the thinking that went into creating such a work of beauty such a long time ago,” she said.

Te Papa expects 100,000 people to view the exhibition bringing in an estimated $33 million to the local economy.

Positions Vacant » View All
» Team Leader, First Peoples Art & Culture – TMAG
» Booking Services & Rostering Officer – SLM
Latest News » View All
AWM Council elects Kim Beazley AC as new Chair
bringing 'impeccable record of public service'
Read more.
Dion Pieta director appt to grow Te Ao Māori
perspectives & business at Univ of Auckland Read more.
Apollo awards 2022 shortlists announced
- awards ceremony in London 6-December Read more.
Egyptian archaeologists discover new Queen
tomb of a previously unknown queen Read more.
Ötzi Iceman narrative revisited & rewritten
- spring death & ice movement? Read more.
Top +
Council of Australasian Museum Directors c/o Mr Brian Oldman, South Australian Museum PO Box 234 Adelaide, South Australia 5001 Australia, © CAMD 2022
Copyright: All information and resources provided on this website remain the copyright of the Council of Australasian Museum Directors. Permission is granted for viewing and downloading for personal and not for profit purposes. Those wishing to reproduce any materials for commercial, educational or other uses are requested to contact us.
Disclaimer: The content of this website is provided for information purposes only and is not intended as a substitute for professional advice. No claim is made as to the accuracy or authenticity of the content of the website. The Council of Australasian Museum Directors does not accept any liability to any person for the information or advice (or the use of such information or advice) which is provided on this website. The information on our website is provided on the basis that all persons accessing the site undertake responsibility for assessing the relevance and accuracy of its content. No responsibility is taken for any information or services which may appear on any linked web sites. Hostgator.
.