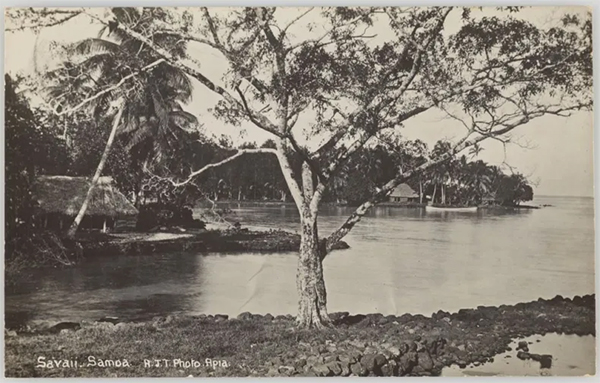 The ongoing project Mapping the Sāmoa Collections aims to learn more about the measina Sāmoa in our collection and make them more accessible to communities. As part of the project, Research Assistant Alexander Gordon has been looking into New Zealand soldiers in Sāmoa in the First World War.

On 29 August 1914, a few weeks after World War I began, 1400 soldiers of the New Zealand Expeditionary Force landed at Apia in Sāmoa. The western islands of Sāmoa had been a German colony for 15 years, and the British Government had asked New Zealand to take control of the important radio station there. There was no resistance from German officials.

Unsurprisingly, soldiers brought many souvenirs back with them to New Zealand. In the Sāmoa Collections at Te Papa there are at least 60 objects donated by these soldiers or their families.

From the low and despised…

James Baxter Fleck, a 50-year-old English jeweller, described himself as one of “the most despised outcasts in Sāmoa”. He believed everyone looked down on him because he was a private soldier – the lowest rank in the military hierarchy.

Today, however, we know more about him than many other soldiers thanks to the letters he sent to Elsdon Best, the ethnologist at the Dominion Museum, Te Papa’s predecessor. James was interested in history and spent his spare time taking notes on Sāmoan tools, va‘a, buildings, and conversations with local people. 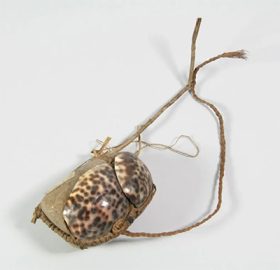 James was fascinated by pule ta‘i fe‘e and twice sent an account of the Story of the Octopus and the Rat (see book below), which suggests why the lure works. In 1919, he purchased two for the museum.

He also donated eighteen to‘i ma‘a, one of which was found whilst exploring the Falemauga cave, at the request of Elsdon Best. This large basalt cave was originally formed by lava flows in the mountains on Upolu. Inside are numerous platforms made from carefully piled stones, and oral histories record that it was used as a place of refuge in times of conflict.

After the war, Sāmoa was governed by colonial administrators from New Zealand until 1962. In December 1919 James was discharged from the army and returned to New Zealand. He had been stationed in Sāmoa for more than three years. In Auckland a few years later he met Florence King.

Florence – known as Florrie – was born in the village of Sale‘aula on Savai‘i of English and Sāmoan descent. As a teenager, she learnt German whilst working as a domestic servant in Apia.

In 1917 she moved to Auckland where she worked as a housemaid in the Grand Hotel and taught herself to speak English. In 1925 Florrie and James were married. Later, Florence’s parents joined them from Sāmoa, living with the family in Palmerston North. 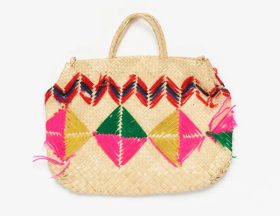 Florrie and James maintained an affectionate connection to Sāmoa for the rest of their lives. They continued to use the baskets, jewellery and other treasures that they had brought to New Zealand, many of which were later gifted to Te Papa and to Te Manawa in Palmerston North.

Their daughter Alice remembered James enthusiastically telling visitors the Story of the Octopus and the Rat and proudly showing them his own pule ta‘i fe‘e. In 1968 Florence returned to visit her birthplace with Alice. Their families in New Zealand and Sāmoa are still in touch today.

…to the high and mighty

The paopao below comes from the other end of the political scale. It is associated with two of the most prominent figures in Sāmoa at the time. Colonel Robert Logan (see photo below), a New Zealand army officer who was made ‘administrator’ of Sāmoa, probably sent it to the museum in 1916.

In turn, it had been presented to him by Malietoa Tanumafili I, who was known at the time as ‘high chief’ or ‘king’ of Sāmoa. Malietoa was one of two Fautua, chiefly advisors to the administration, along with Tuimaleali‘ifano Fa‘aoloi‘i Si‘ua‘ana I.

Although a paopao was an everyday object – unlike, for example, the more prestigious va‘aalo (bonito-fishing canoe) – this one was special because it won the king’s birthday race.

Boat races have a long history in Sāmoa, dating back to at least the nineteenth century. Since Sāmoa had become part of the British Empire, the king’s birthday became an ideal time to hold these significant community sporting events, along with feasts and parades. 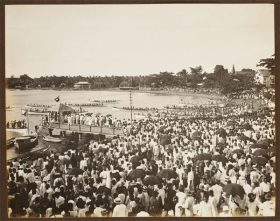 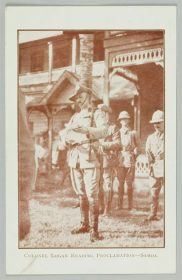 Relationships between the New Zealand administration and the people of Sāmoa were not always so cordial. In a letter written in 1918 (now held at Archives New Zealand) Robert Logan disparagingly described Sāmoans as children. This paternalistic attitude characterised New Zealand rule in the Pacific.

That same year the negligence of New Zealand officials resulted in the devastating arrival of the influenza pandemic. Living in Apia at the time, James Fleck experienced it first-hand. In a letter he criticised the “carelessness and greed and indifference [that] let the Epidemic in here”.

Nearby both Florence’s mother and sister were very sick, but thankfully recovered. Many others did not: it is estimated that up to 22% of the population may have died of the virus, unlike in neighbouring American Sāmoa, where a successful quarantine dramatically reduced the mortality rate. 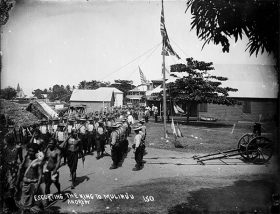 Over the course of this project, I have been intrigued by how the measina Sāmoa in our collection give us insight into the lives of Sāmoans and New Zealanders, as well as the ways that the relationships between the two countries have changed over more than 100 years.