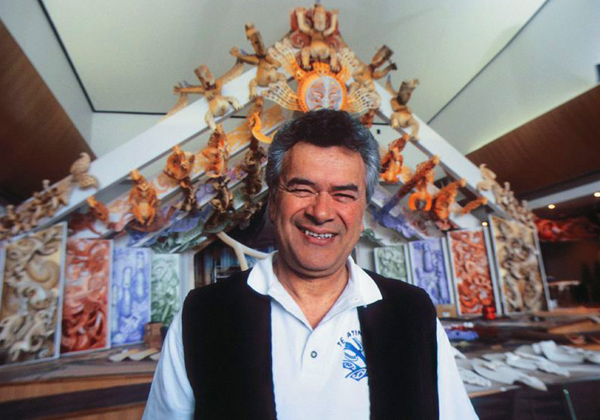 His contribution to Te Papa and the arts in Aotearoa was immeasurable. An esteemed teacher and practitioner of Māori arts, Cliff was appointed Director Director Bicultural Relations for the Museum of New Zealand in 1993, and was instrumental in shaping Te Papa.

He went on to serve as Te Papa’s first Kaihautū (Māori co-leader) and oversaw the creation of his most widely recognised contribution to the museum: Te Hono ki Hawaiki, a magnificent wharenui, or meeting house.

Cliff’s passion to revitalise and share Māori arts endured his entire life, and he had a profound impact on Te Papa and many of the staff who worked with him.

This was especially evident among the Kaitiaki Māori/the Māori staff, some of who still work in the museum. They have shared some of their memories here.

“In the beginning was Te Kore, the void. Then came Te Pō, the potential. Then Te Ao Mārama, enlightenment. Such was the creation of the world and the process for the creation of my art.” – Cliff Whiting, 2015

(Go my elder, so that you may reach the sacred mountain waters of your ancestors, and they will unfasten and present you with the chiefly dogskin cloak. A mantle for you in the warriors ranks. The plume of the sea I take from the surging waves, about to disappear in the stormy seas.)

With a heavy heart, we farewell a great leader, an exemplary, visionary artist for his people.

Cliff Whiting was a significant, early influence of mine. While I was at school, I read about his art practice and the wharenui restoration work that he was leading with the Historic Places Trust. An important difference that he made, which is core to our own practice as Māori working in museums, was ensuring that the haukainga, the home people, were central to decision making and actively involved in every aspect of the work.

I was profoundly inspired by this, and the fact that there were job opportunities working with whānau, hapū, and iwi on kaupapa involving arts and taonga tuku iho. His approach shaped my own understanding and purpose of the role of a kaitiaki Māori, way back then.

Years later, in 1993, Cliff became our boss at the National Museum, as the first Director of Māori and bicultural development. Cliff was hugely supportive of all the Māori staff at the museum and what we were tasked to do. At the time, major changes required leadership and vision. I remember his pōwhiri in front of Te Hau ki Turanga, with Hema Temara leading us all in a “papaka crab” haka.

On his first day in the job, Cliff casually joined our little round table in the Ethnology room wearing a leather jacket. He wore suits too, particularly when he was appointed the Kaihautū in 1995.  But I’ll always remember him being comfortable not so much in a boardroom, but out in the community, or in the ngahere, creating, visualising, and sharing his knowledge.

When we were fully engaged in the development of the Museum of New Zealand Te Papa Tongarewa, Cliff was our main support. He encouraged me to take on big projects. When I said I didn’t want to be a Concept Developer for the new Māori exhibitions, he just uttered simply, “it’s your future”.

Cliff took me to iwi and Māori art meetings for a couple of years. That’s when my eyes were first opened to iwi engagement and the potential through his approach, of listening and gathering in ideas, then laying out a vision. He would work in a way that was alongside people. He had his own style. People warmed to him and the respect was reciprocal.