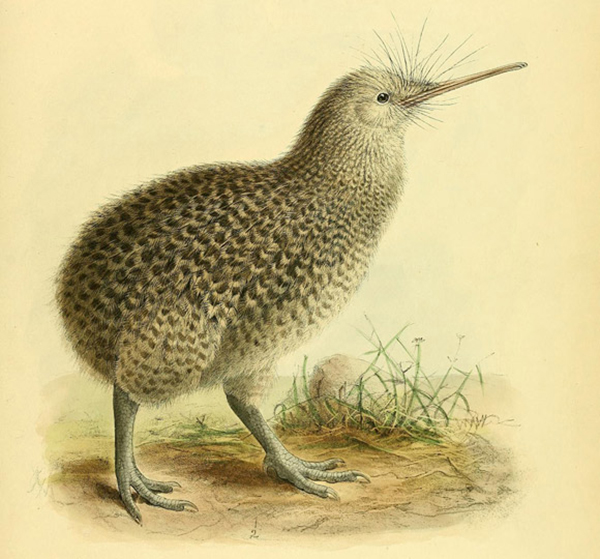 Paleontologists have described a new species of kiwi that lived during the mid-Pleistocene period on the North Island of New Zealand.

“Kiwi are an enigmatic and threatened group of birds, unique to New Zealand, with six living species recognized,” said Dr. Alan Tennyson from the Museum of New Zealand Te Papa Tongarewa and Dr. Barbara Tomotani from the Netherlands Institute of Ecology.

“Note that ‘kiwi’ can refer to single or multiple birds because ‘s’ is not used to denote plural nouns in the Māori language.”

“While modern kiwi species are well represented in the Late Pleistocene/Holocene, the fossil record of kiwi remains extremely poor,” they added.

“Until 1998, the oldest known kiwi fossils were only about 50,000 years old (from Tuarangi Cave, South Canterbury) and were all similar to modern kiwi species.”

“Thus, the transition between the Miocene protokiwi and recent species remains unknown,” they said. 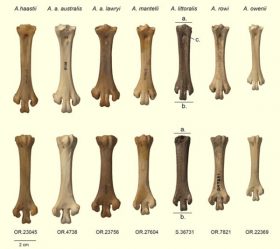 Dorsal view (above) and ventral view (below) of the tarsometatarsi of Apteryx littoralis and other kiwi species analyzed in the study; the differential diagnosis characters are marked on the figure: (a) narrower proximal end, (b) narrower distal end and narrow width across the trochlea, (c) deeper sulcus extensorius. Image credit: Tennyson & Tomotani, doi: 10.1080/08912963.2021.1916011.

The new fossil — the kiwi’s tarsometatarsus — bridges the gap between the Miocene fossil record and the modern fauna.

The specimen was collected in 1998 at a site near Marton in the North Island of New Zealand.

In the new study, Dr. Tennyson and Dr. Tomotani examined the fossil and compared it with 161 kiwi specimens.

They found that it is very similar to the tarsometatarsi of living species, most closely resembling Apteryx rowi and Apteryx mantelli in size and shape, but has a unique morphology: it differs in being stouter, with proportionally narrower proximal and distal ends.

The fossil is about 1 million years old (mid-Pleistocene period), making it the second oldest known record of kiwi.

“We can speculate that mid-Pleistocene kiwi were not only similar in size and appearance to modern kiwi but also lived in similar environments,” the researchers said.

“Apteryx littoralis was probably restricted to a coastal region due to volcanic activity in the central North Island,” they said.

The team’s paper was published in the journal Historical Biology.