You are here: Home » Articles filed under: 'News' » Article: 'Te Papa on how to photograph fantastic water bears'

Te Papa on how to photograph fantastic water bears 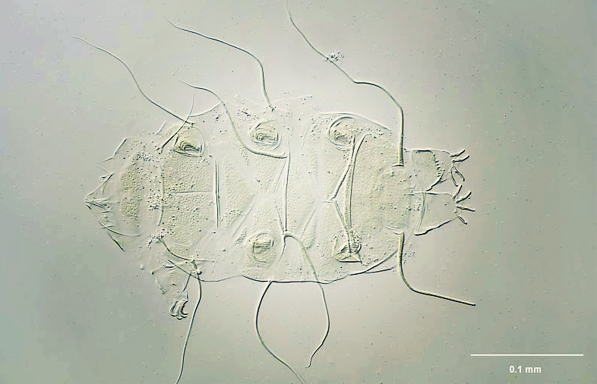 At Te Papa we’re constantly photographing our collection items – whether that be art works, historical objects, or scientific specimens.

Here, Jean-Claude explains why photographing a water bear is such a ‘bugbear’ and bug expert Phil Sirvid fills us in on exactly what a water bear is, and why they are one of the most indestructible creatures on the planet.

What is a water bear?

Phil: ‘Little water bears’ were so named by Johann Goeze, a German pastor-naturalist who was the first to describe them in the 1770s.

Also known as moss piglets, water bear is a common name for a phylum of animals formally called Tardigrada (phylum is the highest classification rank below kingdom). Tardigrade means ‘slow stepper’, a description of their lumbering gait on stumpy legs with claws.

All species are very small, with the largest of them coming in at just over a millimetre long. They have eight legs and like insects, have to moult to grow.

Water bears have lumbered around for at least 500 million years (mid Cambrian).

Their closest relatives are velvet worms, arthropods (e.g. spiders, centipedes, crustaceans, insects) and round worms. There are about 1,200 species described worldwide, of which nearly 90 are found in New Zealand.

We almost certainly have more species waiting to be discovered.

Where to find a water bear

They live in terrestrial, freshwater, and marine environments from the highest mountains (over 6,000m in the Himalayas) to the bottom of the ocean (-4700m and counting), and from the tropics to Arctic and Antarctic polar regions.

Notwithstanding their ability to withstand desiccation, they are essentially aquatic creatures. They are very common in moss and lichen, where they live in the film of water around leaves, stems, and other substrates.

Most feed on plants, but a few are carnivorous. While they might be called water bears, they are considerably smaller and less dangerous to people than actual bears!

The toughest animals on Earth?

Phil: Water bears are unbelievably tough – and even that is an understatement.

While they don’t prosper in such conditions, they can survive periods of exposure to extremes of radiation, heat up to 150ºC for a few minutes, cold (-270 ºC), pressure (6,000 atmospheres), and more that would kill a human very quickly.

They are also the only animal known to survive exposure to the vacuum of space – as proved by a European Space Agency experiment.

If they are deprived of water they can almost totally shut down their metabolism and survive several decades of being nearly completely dried out – add water, and off they go again.

No surprise then that they are predicted to be among the last survivors once a dying and expanding sun starts incinerating our planet.

Phil: As a national museum, one of the missions of Te Papa is to assemble and care for comprehensive collections of plants and animals found in New Zealand.

Just as New Zealand has many unique species of plants and other animals, many tardigrade species are only found here.

These specimens help us understand New Zealand’s biological heritage, and serve as reference material for current and future generations.

Te Papa has around 2,500 specimen lots of tardigrades with 27 of these being primary types.

As tardigrades are extremely small, specimens are permanently mounted on glass slides so they can be looked at under a microscope. The slides are stored in covered trays and in sturdy boxes. This protects the specimen slides from dust, damage, and fading from exposure to light.