You are here: Home » Articles filed under: 'News' » Article: 'Te Papa on Moa vs Superman'

Te Papa on Moa vs Superman 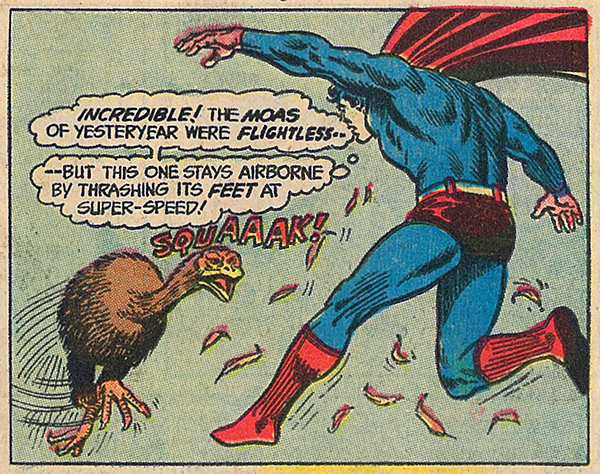 Moa vs Superman: Poignant extinction lessons via a 1970s comic. ‘This Superman story is actually a great portrayal of an extinct species and its tragic fate at the hands of humankind.’

Lots of us can list a handful of Superman’s foes – Lex Luthor, General Zod, Doomsday – but few know of the time that Superman fought a giant moa. That’s right, New Zealand’s own moa! Science researcher Rodrigo Salvador tells us more.

‘The last moa on Earth!’

The supermoa could also regenerate lost limbs extremely quickly and even attack with a barrage of arrow-like feathers.

But the meta-moa was no villain – all it wanted was to go back home.

‘The world owes the moa another chance for survival’

Superman takes the bird back to New Zealand and establishes a moa reserve. He does that by setting up a fence and ignoring the fact that this moa could fly.

Anyway, it’s the intention that counts, I suppose. 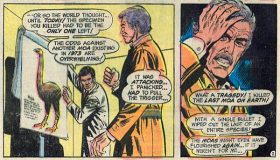 The story ends with Halaway saying that ‘the world owes the moa another chance for survival’.

If you ignore the superpowers and the comic book stuff, this Superman story is actually a nice portrayal of an extinct species and its tragic fate on the hands of humankind.

If nothing else, I hope it has inspired a reader, somewhere, to become a scientist – or to fight to preserve other endangered animals.

Maybe superman’s story has inspired you to know more about amazing moa? Te Papa’s new Te Taiao | Nature exhibition, has so much moa goodness – you can find out:

Also, to learn more about moa, take a look at this article on the Journal of Geek Studies and at Extinct Birds of New Zealand, an amazing book from Te Papa Press authored by our Curator of Vertebrates Alan Tennyson.