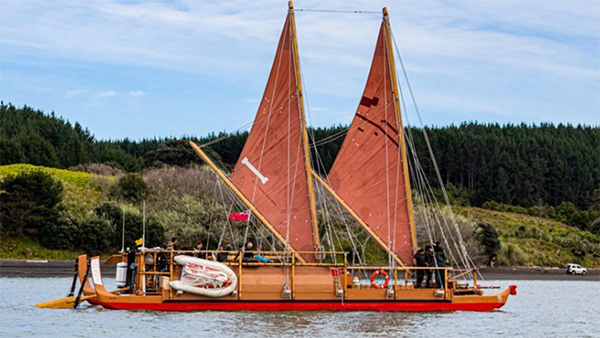 Waka hourua, waka tētē and waka tangata will take centre stage at Te Papa museum this summer, as it welcomes two major new exhibitions showcasing the vessels, and the expert voyagers who helmed and navigated them.

From Saturday November 12, visitors to Manu Rere Moana, will learn about the knowledge and skills that enabled Māori to sail to Aotearoa in double-hulled, sail-propelled waka using celestial navigation.

A replica waka hourua, created by the late renowned carver Tā Hekenukumai Ngāiwi Busby (Tā Hek Busby) in an effort to revitalise expertise and history associated with the ocean-going vessels, will greet visitors to the waterfront museum on the launch weekend. 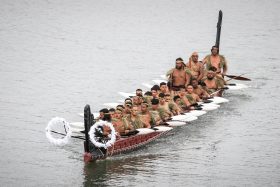 The waka taua built for the centenary commemorations of the signing of Te Tiriti o Waitangi during the 80th anniversary celebrations of the launch of Ngātokimatawhaorua at Waitangi in 2020. Photo / Supplied.

Two scale replica waka taua, the last to be carved by Tā Hek Busby and his team before he died in 2019, alongside a collection of paddles carved by Billy Harrison, a graduate of Te Wānanga o Kupe Mai Tawhiti, will greet visitors inside the exhibition.

“Navigating the Pacific was one of the world’s great acts of exploration, and there is a thriving waka community in Aotearoa today,” says Dr Arapata Hakiwai, Māori exhibitions lead.

“We are honoured to celebrate the waka community and its mātauranga at Te Papa.”

The side-by-side exhibitions feature photographs, video and audio designed to share the mātauranga of waka and immerse visitors in the history of vessels and their pivotal role in the discovery and navigation of Aotearoa.

Manu Rere Moana is a renewal of one of the museum’s long-standing exhibitions and celebrates the intergenerational mātauranga shared across the Pacific Ocean.

Karakia, waiata and waka chants, and even the scent of woodchips from a freshly-carved waka immerse visitors in an all-encompassing multi-sensory environment, with the “soundscape” crafted by award-winning musician Tiki Taane. 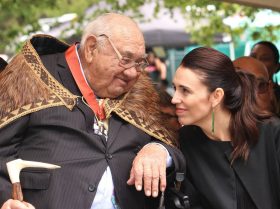 At the heart of both exhibitions is the legacy of Tā Hek Busby, while in Manu Rere Moana, Mau Piailug of Satawal, Micronesia is also featured in the pair’s 1980s, multi-decade mission to rekindle the knowledge of Pacific navigation that ultimately culminated in the voyage of Te Aurere, captained by Stan Conrad, from Aotearoa to Rarotonga in 1992.

The exhibition includes a one-third-size replica of Te Aurere, Te Aurere-iti, built by Tā Hek Busby, along with large-scale steering paddles and a rare and precious prow and stern lent by Auckland Museum.

Sound and video installations evoke the experience of life on the high seas. 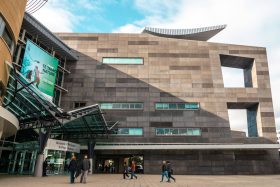 The exhibition honours kaumātua Wiremu Wiremu alongside Tā Busby, both central figures in the waka world who died in recent times.

Sixty photographs of waka taua at Waitangi in 2020, celebrate the 80th anniversary of the launch of Ngātokimatawhaorua – the waka taua built for the 100-year commemorations of the signing of Te Tiriti o Waitangi.

“The whole waka community, waka hourua, waka taua, waka tētē and waka tangata are coming together to celebrate the taonga and traditions left to us by our tūpuna,” Bosch says.

“It’s such an honour to be able to bring He Kaupapa Waka to Te Papa Tongarewa and to open it alongside Manu Rere Moana makes it even more special,”

Te Papa Head of Mātauranga Māori Migoto Eria says the museum is excited to be able to open the two exhibitions together.

“Te Papa is privileged to have the waka community work with us to share their mātauranga with the world,” Eria says.

“As was the kōrero of Papa Hek, we are inspired with what our tūpuna could achieve with the guiding knowledge of the whetū marama, the starscape of the Pacific night sky,” says Eria.