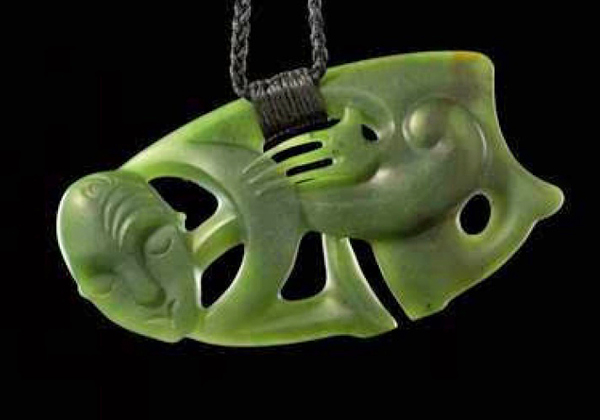 Kura Pounamu: Our Treasured Stone, an exhibition of more than 200 taonga pounamu (greenstone treasures) opens at Canterbury Museum on 15 December.

Kura Pounamu tells the story of this most precious of stones, its significance for Māori and Ngāi Tahu as the kaitiaki (guardians) of the resource, and its enduring value from ancient times until today.

The earliest pounamu pieces in the exhibition are believed to be the toki (adze blades), tools used for working wood. Some are thought to originate from early settlement times some 700-800 years ago, and replicate East Polynesian adze shapes.

The exhibition experience has been enhanced by a section showcasing the importance of Waitaha (Canterbury) as the gateway to Te Tai o Poutini (West Coast), the source of most pounamu and Kaiapoi Pā as the centre of the pounamu trade.

“For generations, Māori in Waitaha and Te Tai o Poutini have shaped pounamu and pounamu has shaped these regions. Pounamu is part of our national identity,” she says. “This exhibition is a homecoming for these taonga, and we’re so pleased to be the ones welcoming them back and at Canterbury Museum.”

“Bringing these precious treasures of Aotearoa back to the South Island will be an important occasion. This is the whenua from which many of these taonga are sourced from. They are returning home.” Dr Hakiwai says.

“Being able to present Kura Pounamu: Our Treasured Stone with Ngāi Tahu iwi and Canterbury Museum is something special,” he said. Te Papa has a long association with Ngāi Tahu with Sir Tipene O’Regan being on the board of the National Museum Council before Te Papa opened and on the Ngā Kaiwawao Māori Advisory Group to the Board leading up to the creation of Museum of New Zealand Te Papa Tongarewa. Ngāi Tahu were also the fifth Iwi Exhibition at Te Papa from 2006–2009.

Dr Hakiwai explains that Kura Pounamu: Our Treasured Stone reaffirms the ancient links and connections Ngāi Tahu has with pounamu.

“We acknowledge the close and enduring relationship Ngāi Tahu has with their ancestral stone, pounamu”, he said.

In 1997, Ngāi Tahu were recognised as the owner of all naturally occurring pounamu within their large tribal area in the South Island, which is known in Māori as Te Wai Pounamu: the greenstone waters. Today, the people of Ngāi Tahu have resumed their special role as the owners and guardians of pounamu.

Te Rūnanga o Ngāi Tahu Kaiwhakahaere Lisa Tumahai says that many generations of Ngāi Tahu whānau have had a strong and special connection to pounamu, and their rightful role as guardians was reclaimed with the Pounamu Vesting Act in 1997.

“We treasure pounamu. It protects and guides us, and it’s significant to us as Ngāi Tahu that this exhibition allows these beautiful taonga to be shared with local, national and international visitors to Canterbury Museum,” says Ms Tumahai.

Kura Pounamu: Our Treasured Stone was shown at Te Papa from September 2009 to July 2011. It was then reworked for touring internationally and was shown at five venues in China from November 2012 to June 2014, and in Paris in from May to October 2017.

For centuries, Māori have prized pounamu for tools, weapons, adornments, and as a symbol of prestige and authority. For Māori, pounamu remains a potent symbol of cultural identity.

Pounamu is found only in the South Island of New Zealand, Te Wai Pounamu (the greenstone waters). It begins its journey in the rock where it is formed, then is slowly ‘freed’ by erosion. Most pounamu settles in riverbeds, and some is carried out to sea and scattered along the coast.