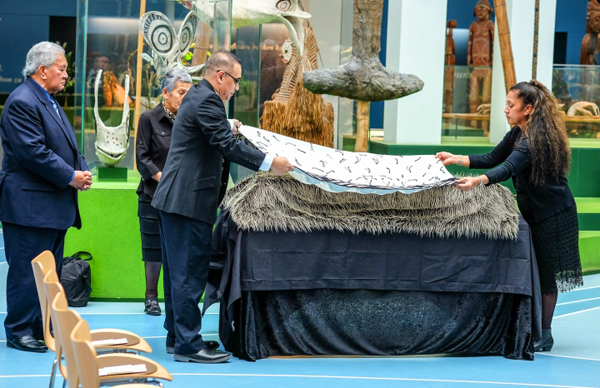 The Übersee-Museum Bremen and three other institutions are repatriating 59 Moriori and Māori ancestral remains collected in the 19th century.

On May 29, the Museum of New Zealand Te Papa Tongarewa in Wellington will welcome home Māori and Moriori remains long held in European museums. The repatriation of the bones, which were exhumed or taken without permission from their ancestral country, is a step forward in the ongoing effort to reverse the colonialist collecting practices still evident on the shelves of many Western institutions.

The pōwhiri (a Māori welcoming ceremony) at Te Papa will follow the May 18 handover of 44 Moriori and Māori ancestral remains at the Übersee-Museum Bremen in Germany. Those are among 59 Māori and Moriori remains being repatriated by four European institutions, including the Karolinska Institutet in Sweden, which is returning skulls taken in 1890 and a mummified, tattooed Māori head.

With the support of the City of Bremen, the Übersee-Museum investigated the provenance of 35 Moriori ancestral remains, linking them to collector Hugo Hermann Schauinsland, who visited New Zealand between 1896 and 1897. Six Māori ancestral remains were connected to Henry Suter, who arrived in New Zealand in 1887. In a press release, Übersee-Museum Director Wiebke Ahrndt stated that the research “made clear that there is no longer any ethical justification for retaining the ancestral remains of the Moriori and Māori in our collections.”

The senate of Bremen agreed on May 3, 2016 — almost three years after Te Papa’s request for the return on July 4, 2013. Dr. Carsten Sieling, the mayor of Bremen, affirmed in the release that, compared to the 19th century, “today, we consider the acquisition of this collection to contravene human dignity.” Dr Arapata Hakiwai, Te Papa’s Kaihautū (Māori co-leader), also stated:

We appreciate their dedication to ensure the provenance of these ancestors is unveiled. To add, this is also a bittersweet occasion, as our repatriation work reveals newly established colonial museums, alongside visiting natural historians from Europe actively participated in the trade of Māori and Moriori remains, “taken” from wāhi tapu (sacred repositories). Our next step is to facilitate the safe return of the ancestors to their iwi (tribal groups). Many New Zealanders are unaware of this history, and do not realize the long standing history of lack of respect offered to wāhi tapu by colonial settlers.

Indeed, the history of rampant theft from ancestral burial sites for museum collections is still obscure, and hundreds of remains await return. Nor is the issue confined to Europe. Last year, the Smithsonian Institution repatriated the remains of at least 54 Māori and Moriori people, while the Beneski Museum in Massachusetts returned a Māori child’s skull. At the time, the Guardian reported that, since the initiation of New Zealand’s government repatriation program in 1990, around 400 individuals had been returned, yet an estimated 600 remained in institutions and an unknown number in private hands. The government mandated Te Papa to form its own repatriation program in 2003, and the national museum has since been active in many of the returns.

Unfortunately, repatriation is a slow process, and recent episodes like last year’s auction of human remains and sacred indigenous objects by EVE auction house in Paris, as well as the stalled campaign for the return of the skulls of two Beothuk people from the National Museums Scotland, demonstrate how difficult it is to enforce, especially without dedicated government action. The Native American Graves Protection and Repatriation Act has helped in the United States, but even that is limited and only applies to federally recognized tribes. When Wampanoag remains were returned for reinterment this year in Rhode Island, following a two-decade effort to track them down in several museums, the not federally recognized Pokanoket tribe protested that it had been left out of the process. Furthermore, provenance can be fuzzy for stolen remains, thus making the question of whom to return them to a delicate one in some instances.

When the remains of dozens of Māori and Moriori people are finally welcomed in New Zealand later this month, the action will not undo the indignities and damage inflicted on indigenous people in the 19th century. It will hopefully reinforce the need for continued attention on museums to address this history rooted in their collections.