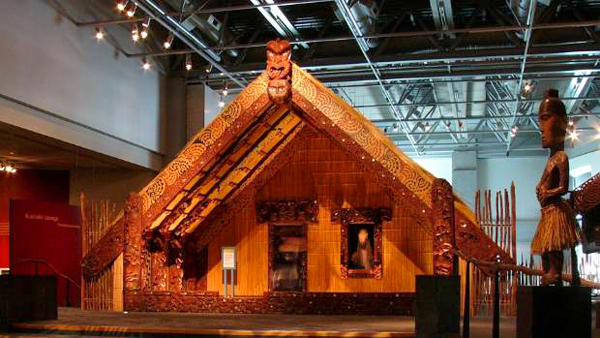 Te Hau-ki-Tūranga has been a constant fixture at Te Papa since 1996 and will remain so until at least 2019.

The world’s oldest wharenui of its kind will stay put at Te Papa for the next 2½ years.

Te Hau ki Turanga was set to be returned to rightful owners Gisborne iwi Rongowhakaata, before the end of the year but thanks to an upcoming exhibition it will remain at the national museum in Wellington.

Ko Rongowhakaata: The Story of Light and Shadow opens at the end of September with the wharenui one of the most important taonga – treasures – on display.

“Rongowhakaata are our eighth iwi in residence and the exhibition will mark the occasion of the 144 years since the passing of Raharuhi Rukupo, the master carver of Te Hau-ki-Tūranga,” museum Kaihautū Arapata Hakiwai said.

The museum would work closely with Rongowhakaata iwi to build on the existing relationship and assist where they could on the restoration of Te Hau-ki-Tūranga.

“It is envisaged that restoration will largely be undertaken during the exhibition period.”

“The return of Te Hau-ki-Tūranga rests with the iwi and we are committed towards actively assisting Rongowhakaata’s cultural heritage aspirations.”

The iwi ownership of the meeting house was recognised by the Government during the settlement of the Rongowhakaata Treaty claim in 2011 when it was agreed the wharenui would be returned to the Rongowhakaata people almost 150 years after it was taken by the Crown.

While the wharenui’s future in Wellington is secure for the next couple of years, its eventual repatriation back to Gisborne looks to be inevitable.

“The decision as to whether Te Hau-ki-Tūranga will remain at Te Papa or return to Gisborne is in the iwi’s hands and has yet to be made,” Te Papa director Charles Royal said.

“I believe this decision will be addressed through an iwi referendum, however, I do not know when this will take place.”

Lead negotiator for the iwi Willie Te Aho said allowing the wharenui to remain at Te Papa was the best option for now.

“We’re still working through the feasibility of returning the house back to Turanga – Gisborne. We’re about another 18 months away from putting that option out to our people.

“We don’t want a situation where we can’t sustain the return of the house.”

Investigations continue to decide if the wharenui should eventually be returned to Gisborne but Te Aho said the immediate issue was to repair and restore the wharenui and ensure its ongoing care and protection.

“We want it to receive the top quality care that it receives at Te Papa and if that can’t be sustained in Gisborne then our people won’t be supportive of it returning physically home.”