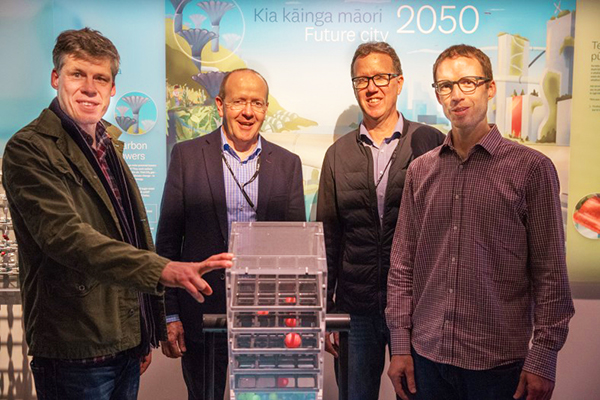 Imagine a future where huge solar-powered towers suck and capture carbon dioxide straight from the atmosphere.

That’s the future Te Papa asks us to step into. Its recently opened Te Taiao | Nature exhibit features new energy technologies that can capture carbon dioxide out of the air, and new types of solar cells. The sustainable technologies are based on the work of two teams of scientists at the MacDiarmid Institute.  Both teams are creating materials key to mitigating climate change.

Metal organic frameworks (MOFs) are crystals with tiny pores that soak up targeted molecules the way your kitchen sponge soaks up water.

When placed in cylinders they can store hydrogen in much smaller spaces and at a much lower pressure. This could potentially allow cars, or even planes, to run on hydrogen.

A team of MacDiarmid Institute investigators, including Principal Investigator Professor Shane Telfer, Massey University, have come up with new materials and a new process for creating MOFs, which has enormous potential for mitigating the effects of climate change.

Professor Telfer and his team are researching how MOFs can be tailored to match the size and shape of target ‘guest’ molecules. One super topical and welcome ‘guest’ that Shane says he is working hard on trapping is C02.

“MOFs are already being used for carbon dioxide capture from power plants and we’re now looking to use them to sieve out the C02 that is already present in the atmosphere. While these materials don’t break down the C02, they prevent it from being released into the atmosphere. Therefore they can mitigate climate change.”

This new game-changing material is currently on display at Te Papa’s new Te Taiao | Nature exhibition, showcasing the research being done by New Zealand scientists to help solve the most pressing threats to our environment. 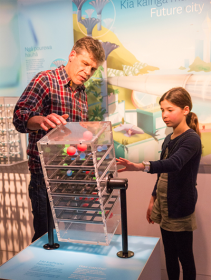 This new technology may unlock the possibilities of a new generation of flexible solar panels that can be rolled up, transported easily, and power everything from smartphones and e-bikes to entire apartment blocks.

Professor Hodgkiss and his team are using lasers to fine-tune these bendy solar panels. He says that figuring out which materials are going to work best as solar panels involves a bit of trial and error, and a lot of very precise laser measurement.

“We study the cells by blitzing them with very short pulses of lasers – essentially doing strobe photography – and taking snapshots of the electricity being produced and where it’s being lost.” 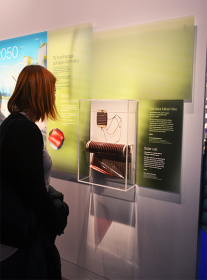 The new flexible solar cells on display at Te Papa.

Professor Telfer wants those feeling worried about the future of our planet to walk away from the exhibit feeling hopeful.

“In the face of much negativity around climate change, it’s important to maintain a sense of optimism that solutions may exist. These will be driven by investment in research.”

Dr Dean Peterson, Te Papa’s Director of Strategy and Performance, said that the new exhibition was looking at the future, how to get there and what needed to change to get to that new future.

“Our new partnership with the MacDiarmid Institute allows us to showcase some of New Zealand’s leading research on materials science relating to building a more sustainable future.”

For more information on the new Te Papa nature zone: