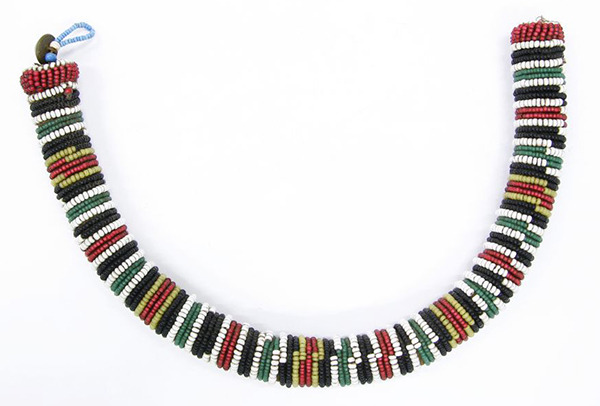 In this third look at our South African Collection, Summer Scholar Courtney Powell explains the intricate craft of beaded fashion and the important family connection behind some of these items.

The subject of this blog is the beaded tablet pendant donated to the Colonial Museum in 1936 by Lady Sarah Kinsey and her daughter, May Moore. The pendant was produced sometime in the early 20th century, perhaps as a part of the tourist trade. It is made of very small black, white, pink, green, and red glass beads, that are woven together to create a zig-zag pattern. Blue beads border the pendant and it is connected with a single string of the same blue beads. It would be worn around the neck and is a particularly long piece, at 29cm. 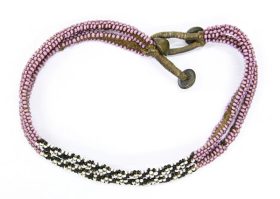 Gifts from the Kinsey family

The pendant is part of the museum’s Kinsey Collection, the objects from Sir Joseph Kinsey’s personal collection. He was a prominent businessman and philanthropist, marrying Sarah Garrard in 1872 and emigrating to Aotearoa New Zealand from England in 1880. He founded the shipping firm Kinsey and Co. with freight and passenger steamers providing travel to and through South Africa to England.

After Sir Joseph Kinsey’s death, his wife and daughter gifted a large number of objects from his collection, which contained items from around the world, in his memory. The pendant was just one of 566 items in the donation to the Colonial Museum. Other donations were also made in Sir Kinsey’s memory to Alexander Turnbull Library, Christchurch Museum, and the then National Gallery.

The Kinsey family were important local figures in Aotearoa New Zealand and the donation of a private collection to be made publicly available contributed to the family’s legacy. Offers of gifts and donations made to the museum are not necessarily accepted, but the size and prominence of the collection, along with the opportunity to bring international objects to a public who had limited access to such views of the world, made it essential to accept. It differs from that of Captain Seddon’s collection, which demonstrated different institutions working together. This is on a more personal level, with the family offering the collection themselves.

The pieces of his collection donated to the museum were numerous and included many domestic ceramic pieces, including ethnographic items from across New Zealand and the Pacific. The objects from South Africa included beaded textiles as well as cowhide shields and arrowheads. The beaded pendant was just one fashion item, other beaded works included in the donation were an armlet and collarette (pictured below). These pieces, alongside the tablet pendant, demonstrate intricate craftsmanship and the adaptation of new materials into existing cultural practices of adornment.

The significance of South African beadwork

There are a number of South African glass beadwork pieces in Te Papa’s collection that was produced during the 19th and 20th century. Glass beads were commonly used to trade items taken across various parts of the world and they gained popularity when introduced in  southern Africa. Missionaries based in South Africa used beads as a means to gain other resources and open lines of communication and exchange.

Beads gained increasing significance in Cape Town with the Dutch East India Company, but were only imported in large quantities by various groups from the 19th century. As an external commodity, the scale at which beaded crafts were able to be made from this period was highly dependent on these resources provided by western traders and missionaries. In some places within South Africa, the foreign materials were then adopted into indigenous cultural practises. Women became the main producers of beaded clothing and became markers of status and skill as well as ethnic identifiers.

Important pieces of the collection

The beaded tablet pendant is representative of a different aspect of colonial connections with South Africa to the other objects that have been examined in these blogs previously. Glass beads were introduced and were adopted as a craft medium to become ingrained in textile culture over time.

As shown in this blog series, these collections are significant for their histories associated with peoples and moments in the fragmented records that remain in Te Papa’s archives. The South African Collection is just one small piece of the museum’s broader International Collections. These items point to earlier connections and interests in within Aotearoa New Zealand to understand other parts of the world.