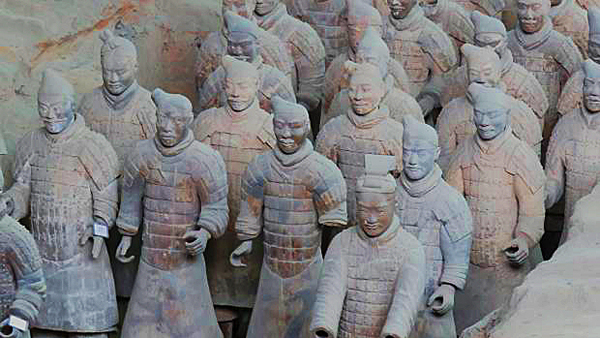 Te Papa museum is planning an exhibition of more than 160 pieces from China’s Terracotta Armies, including soldiers, horses and chariots.

Te Papa will host an exhibition of China’s ancient terracotta warriors next year.

The national museum in Wellington is teeing up an exhibition of the 2300-year-old treasures from the tomb of China’s first emperor, Qin Shi Huang, to open in December 2018.

It is understood the major exhibition, China’s Terracotta Armies, will cost more than $4 million.

A large part of the expense will be transporting the life-size warriors to and from China, and bringing in a team of Chinese experts to install and remove them.

Te Papa head of partnerships and development Wladimir Ramsteijn​ was in China last week seeking sponsorship support for the exhibition and “casting the net offshore” for new ideas and partnerships to help support the commercial side of the museum.

Wellington has previously hosted an exhibition of miniature versions of the famous warriors, but this will be the first opportunity to see the life-sized originals.

Creators were working on how to exhibit the agreed list of 160 works that will include eight terracotta warrior figures, two warrior horses, and two replica bronze horse-drawn chariots.

The exhibition, which is understood to be insured for US$80m, will also feature dozens of treasures from imperial tombs in and around China’s ancient capital of Xi’an, where the army of stone was uncovered in 1974.

The museum was planning to make it an immersive exhibition, and aims to develop film or augmented reality experiences.

Te Papa would also host an exhibition of contemporary Chinese art, and wanted to create Chinese cultural events linked to the exhibition and the Chinese new year celebrations in 2019, Ramsteijn said.