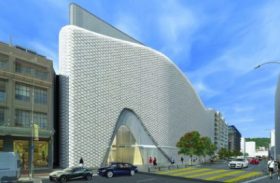 The Wellington City Council and the Movie Museum Limited have today announced a mutually-agreed parting of the ways for a joint project between the Council’s Convention Centre and TMML’s Movie Museum, which were proposed for Cable Street in central Wellington. Both parties remain optimistic for the future of their respective projects.

Wellington Mayor Justin Lester says that the decision was mutual and came after a series of meetings and correspondence between the two organisations. The Mayor confirms that the two sides had given the idea of a joint project the best possible shot, but that it had become apparent that Wellingtonians would be better served with the Movie Museum and the Convention Centre as two separate assets.

Peter Jackson and Fran Walsh and Richard Taylor and Tania Rodger said that “despite the best efforts of all parties, the economics of the Cable Street location proved to be a challenge for the movie museum.

“We remain committed to the creation of a Movie Museum in Wellington and will now be considering other options.”

The Mayor says he is pleased that Sir Peter and Sir Richard are committed to a movie museum for Wellington and that he looks forward to their vision being realised.

The Wellington City Council is looking forward to moving ahead with the Convention Centre.

“This will be a welcome development for Wellington’s business, hospitality and accommodation sectors as it will mean the city will be equipped to host larger conferences and conventions.”

Along with the Convention Centre, Wellingtonians will also gain a brand-new 1500 square metre exhibition space which will be able to accommodate large, internationally significant exhibitions and draw in visitors from around Wellington, New Zealand and internationally.

The Council is in talks with Te Papa – New Zealand’s national museum – about a partnership for the operation of the exhibition space.

“Exhibition spaces around the world are undergoing a renaissance, particularly with the fusion of art and technology. We expect this space to be a game changer that not only brings the best of the world to New Zealand, but also gives a platform for our own creative sector to think big,” the Mayor says.

Geraint Martin, Chief Executive of Te Papa, says the museum is excited to work in tandem with the Council, given Te Papa’s experience, international standing and the proximity of the proposed site and the synergies between the two organisations.

“We are looking forward to working with the Council to realise this opportunity for Wellington,” he said.

TMML is the company established by Peter Jackson, Fran Walsh, Richard Taylor and Tania Rodger to develop and operate a museum attraction in Wellington showcasing theirs and their companies’ work in the film industry in Wellington over the past 25 years and incorporating their own collections.