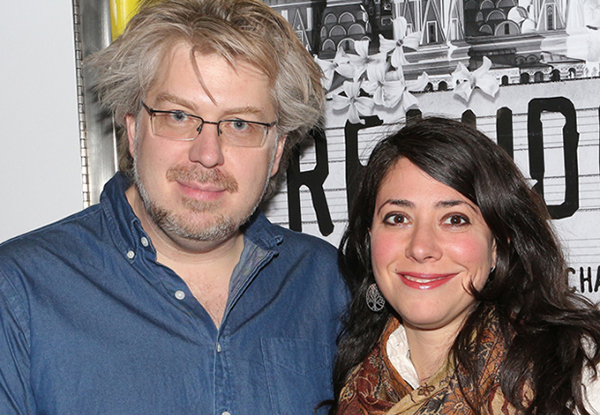 Dave Malloy and Rachel Chavkin will collaborate on the world premiere of Moby-Dick, opening at the A.R.T. in December. (© David Gordon).

Moby-Dick Selections To Preview At American Museum Of Natural History, Broadway World, 13 May 2019

On July 26 and 27, 2019, the American Museum of Natural History in association with the American Repertory Theater (A.R.T.) at Harvard University will present staged excerpts from Moby-Dick, a new musical adaptation of Herman Melville‘s classic 1851 novel, in the Museum’s Milstein Hall of Ocean Life. Written by Tony-nominated composer Dave Malloy (Natasha, Pierre & The Great Comet of 1812) and directed by Tony nominee Rachel Chavkin (Natasha, Pierre & The Great Comet of 1812; Hadestown), this adaptation, which will receive its world premiere at A.R.T. in December 2019, reimagines Melville’s 19th-century classic for a 21st-century America.

For two nights only, the Milstein Hall of Ocean Life will be transformed into a musical theater stage, with a cast of 11 and a live, seven-piece orchestra previewing selections from Malloy’s adaptation under the iconic 94-foot-long blue whale model. Malloy’s eclectic score draws on multiple American musical genres ranging from sea shanties to gospel and jazz.

The Museum, which is celebrating its 150th anniversary, has introduced generations of New Yorkers and millions of visitors to the wonders of the natural world. Malloy says the Museum’s 2013 special exhibition Whales: Giants of the Deep was a source of inspiration and research for his adaptation of Moby-Dick. The exhibition, developed and presented by the Museum of New Zealand Te Papa Tongarewa, featured large whale skeletons as well as numerous cultural artifacts from the Museum’s collection, including a log book from 1830s whaling voyages and a 19.5-inch-long scrimshaw dolphin skull, an especially large and unusual example of the distinctive art form that flourished along with the 19th-century whaling industry. Early scientific studies of whales relied on records gathered and maintained by commercial whaling vessels, and in fact the original Hall of Ocean Life, which opened to the public in 1933, featured hanging skeletons of a sperm whale, finback whale, and California gray whale as well as mural paintings of American whaling scenes by John Prentiss Benson.

The Museum’s collaborations with world-class artists are inspired by a variety of natural, scientific, and cultural phenomena. Recent examples include Grateful Dead drummer Mickey Hart‘s performance of Musica Unversalis, created in collaboration with the Museum’s Director of Astrovisualization Carter Emmart, in the Hayden Planetarium Dome (2018); the performance of On the Nature of Things, a meditation on climate change by choreographer Karole Armitage, who created the work specifically for the Milstein Hall of Ocean Life (2015); and the world premiere of Bruce Adolphe‘s Self Comes to Mind, performed by Yo-Yo Ma and inspired by advances in neuroscience (2009).

The performance will be 90 minutes without intermission, followed by a Q&A session with members of the cast and creative team. Tickets for Moby-Dick are $120 each. The performance begins at 8:30 pm, and seats will be available on a first-come, first-served basis. No reserved seating is available. Tickets are available starting May 20 by phone at 212-769-5200 or at https://www.amnh.org/calendar/excerpts-from-moby-dick-in-concert-under-the-whale. If accessible seating is needed, please email accessibility@amnh.org or call 212-769-5250.

The A.R.T.’s world premiere production of Moby-Dick will begin on December 3, 2019, at the Loeb Drama Center in Cambridge, Massachusetts. Tickets are currently available as part of subscription packages at AmericanRepertoryTheater.org; single tickets will go on sale later this year.