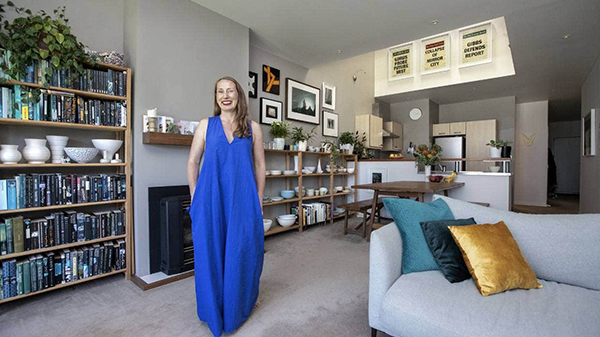 Courtney Johnston, the CEO of Te Papa, at her home in central Wellington. Monique Ford/Stuff.

Courtney Johnston is the chief executive/tumu whakarae of Te Papa. She lives in inner-city Wellington with her husband, Reuben Friend, a general manager at Porirua City Council. Their second-floor apartment is also home, part of the week, to Friend’s three children, aged 11 to 13 years.

Courtney Johnston: I bought this apartment before I met Reuben. Thankfully it’s got three bathrooms which will be helpful as the kids get to their teenage years.

I’d been renting in Wellington for 20 years and this is the first home I’ve ever owned. I grew up on a Taranaki dairy farm and my primary and high school and my extended family were on the same road, so it was quite a small world.

I decided I wanted to live in either the country or the inner city, but not the suburbs.

At the time I was running the Dowse Art Gallery, Petone Settlers Museum, and Lower Hutt Little Theatre, so I had enough buildings to look after – the thought of having to spend weekends doing maintenance on my own home was too much. I opted for an apartment. 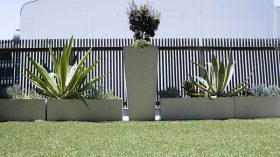 Plants on one of Courtney Johnson’s sunny apartment balconies, a favourite spot for reading. Monique Ford/Stuff.

I was also sold on the two balconies – one of them had fake grass which I thought was a bit on the nose. But I’ve since grown to love it and my favourite thing to do is sunbathe out there with a book.

Before Reuben and the kids, I’d often spend a night in one of the two spare bedrooms because it was a bit of a novelty, like being in a hotel. 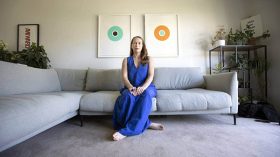 Johnston’s circular framed pieces are by her late friend, Julian Dashper, and the couch is from Citta. Monique Ford/Stuff.

I’ve never been one for clutter, and always associated a calm house with a clean house. But since we have the kids half of the time, I’ve had to learn to relax. The paintwork is a bit scuffed and there’s glitter all over the bathroom but these days it’s more like a home than an inner-city crash-pad.

Having spent so much of my career in the art world, I’m always buying new pieces.

The circular framed pieces are by Julian Dashper who died of cancer a few years ago. He was a dear friend and every time I look at them I’m reminded of what an amazing person he was. 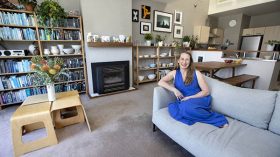 The image in the centre of the gallery wall – a black and white photograph by Ronnie van Hout of Mt Taranaki – is one of Johnston’s favourite pieces. Monique Ford/Stuff.

But I’m also a lot less attached to them so if the odd one breaks, I’m okay with that. I also adore John Parker ceramics and try to buy a new piece each year.

At the centre of the gallery wall is one of my favourite artworks – a black and white photograph by Ronnie van Hout. It’s of Mt Taranaki – or Egmont, as it was known when it was taken in the 1990s. It’s one of the first pieces of art I bought when I graduated from Victoria University and it reminds me of home. 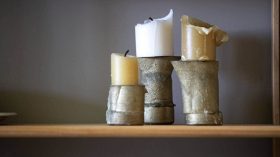 These candlesticks by jeweller Karl Fritsch are “not terribly functional” but still a favourite. Monique Ford/Stuff.

I’m lucky enough to own three cast-bronze candlesticks made by the German-born, Island Bay-based jeweller Karl Fritsch. They’re not terribly functional as candlesticks, but I love them.

All of our books are all grouped by colour, not subject or title. I arranged them a few years ago and it took so long I almost gave up.

But by then I was too committed to the process. I now know to look for a book by the colour of its spine. 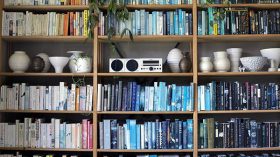 I bought the sofa from Citta before I moved in and at the time it cost more than my car. It’s also incredibly heavy and the moving guys told me that if I ever move, not to call them!

I have a thing for perfume and last year Reuben knocked it out of the park with his Christmas present – a bottle of this Japanese perfume which he bought from World. 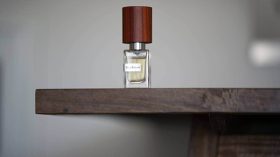 I have about 20 bottles of perfume on rotation.

I also love Warwick Freeman jewellery and try to buy a new piece every few years.

I met Warwick, an Auckland artist, when I worked at the Dowse and he’s since become a friend. My latest acquisition is this lapis lazuli ring, one of my favourites pieces. 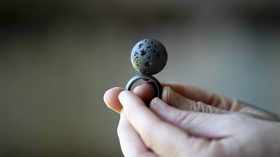 I’ve been in the Te Papa role for two years now. Work is a four-minute walk from the apartment, which makes life easier.

I consider myself lucky that I was at the tail-end of the generation that could still afford to buy a house. I’ll never stop being grateful for that.