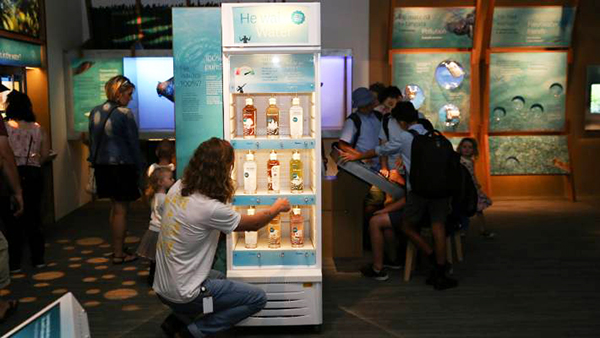 Farmers have hit out at Te Papa over its use of fake farm stream water.

Farmers have hit out at Te Papa over its use of fake farm stream water, calling the move “a disgrace” and accusing the national museum of having a biased agenda.

The outrage comes after National MP Todd Muller tweeted a picture of the bottle of dyed brown water, part of a display in the museum’s Te Taiao Nature exhibition.

The bottle features an image of a cow defecating in a waterway and indicates the water is from the Waikato.

Muller said the bottle and its contents were a “completely unrealistic” depiction of rural life and the work farmers were doing to improve and protect waterways.

“It’s a ridiculous, simplistic image. Dairy farmers have fenced almost all of the rivers and streams on their properties in the last decade and cows can’t get near them,” he said.

“Displays like this are part of the reason farmers are feeling so beaten up – everywhere they look, there’s the narrative that they’re destroying the environment.” 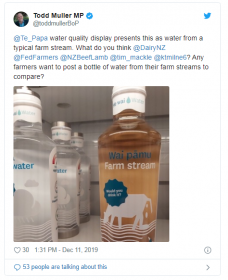 Te Papa spokeswoman Kate Camp said the bottles of water were not samples but had been created for display purposes only.

“The water in each bottle is dyed to symbolise different kinds of water,” she said.

“This display is about telling the story of New Zealand waterways. It’s based on robust research that shows that many waterways in New Zealand – in urban and rural areas – aren’t fit to drink or to swim in.”

The farm stream bottle was one of nine in the display which also included bush and forestry streams, city stormwater and tap water.

“The point of this display is you can’t always tell the health of water by what it looks like – brown water can be healthy, clear water can be unhealthy,” Camp said.

Muller called for farmers to post images of their own water in response but some wanted to take it further and send real samples to the museum.

“When you say “post”, I reckon we do just that,” Tararua farmer Ben Allomes wrote.

“Lets “flood” them with samples from our own streams to put in the display. Hope the PO box is big enough…”

Southland farmer Blair Drysdale said the display was an embarrassment to the museum, which he said had a biased agenda, while Ashburton dairy farmer Craig Hickman responded with a video of himself drinking directly from a farm stream.

Waikato’s Tracy Brown said the use of a fake sample was devastating.

“It’s really disappointing to see our national museum promoting such an anti-farming narrative,” she said.

“It makes me want to cry. This kind of false information is just fuelling the urban-rural disconnect.

“Farmers are working really hard to make things better and every time something like this comes up, we just have to explain again and it’s slowing us down.”As a member of DairyNZ’s Dairy Environment Leaders (DEL) group, Brown was particularly disappointed to learn of the display.

“We had our DEL forum at Te Papa just last week and we were made welcome. It was a real celebration of the work farmers are doing so it’s really super disappointing to find out that was just upstairs.”

“I don’t think they’re biased but I think they’re clumsy. They’re the curators of the country’s story and they need to be careful and accurate.

“Nobody’s saying every stream is perfect and there’s not more work to do but this is not a fair representation,” he said.

Camp said the challenge for the museum was to take a complex and varied picture, and present it in a simple, easy-to-understand way, that was still true to the overall reality.

“That is what we have done with this display. The scientific evidence is absolutely clear, human activity is making many of our waterways not safe to drink, or not safe to swim in,” she said.

“There are many dairy farmers and organisations out there doing great work to care for waterways, and we salute the work they are doing.”

Climate change and freshwater were two major focuses of the museum’s Te Taiao Nature exhibition, where the bottles had been on display since November 19.

“They’re some of the most important scientific issues of our times, and something that we know from research that Kiwis care deeply about,” Camp said.