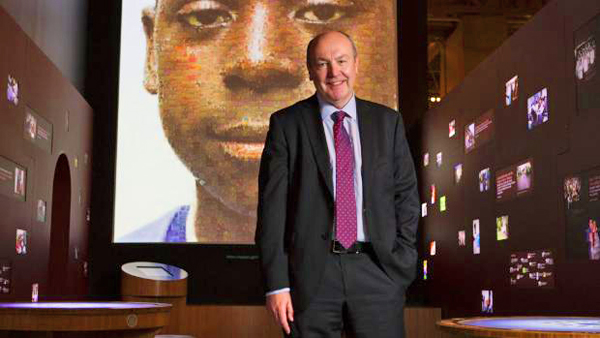 Geraint Martin discovered the magic of museums when he was a small boy.

He saw a portrait by Gustav Klimt of “a Viennese society lady” in Britain’s National Gallery, he says, his voice filling with the memory.

“When you look at it you can almost hear the rustle of her dress.”

He loved Klimt but he hated the old Dutch masters infesting “hundreds of rooms” with “staunch Calvinist people with hats and lots of white ruffs”.

At the British Museum he saw and instantly loved the Egyptian mummies. “It’s stuff that comes from 3000 BC,” he says, wondering.

Martin came from a Welsh mining family and was the first to go to university. He never thought that museums and galleries “weren’t for the likes of me”.

So now he takes over as boss of Te Papa, which aims to be the museum that reaches the people that other museums don’t.

Te Papa, the slogan goes, should appeal to a 14-year-old Pacific lad.

And why, asks Geraint Martin – his first name rhymes with “beer-pint” – shouldn’t such a lad “fall in love with Rita Angus” at Our Place?

After all, something similar happened to him, and he was only five or six.

But is it really so easy?

The former boss of the Counties-Manukau District Health Board wants Te Papa to be a museum of 4.5 million (the rugby-mad Welshman pinched the idea from the NZ Rugby World Cup slogan of a stadium of that size).

He won’t buy the notion that Te Papa is doomed always to fall between two stools, annoying the masses when it tries to go high-brow, but enraging the cognoscenti when it goes all Disney.

“Don’t start off with a false dichotomy, okay?” he says, pitching it high before going low. “It’s not either/or. It’s both/and.” He notes that he himself, like many other humans, mixes “high” interests with low, Chekhov with detective stories.

But tell that to the high-brow Wellington commentators Jim and Mary Barr, who greeted Martin’s appointment with a brutal blog:

The national art collection is stuck up on the fifth floor, the Barrs say, noting that “retailers talk of a 30 per cent drop in customers with each floor up”.

Martin says: Give us a bit of time. Right now both floors five and six are closed till next year, when the world will get a new exhibition of New Zealand art. That will answer “some of the criticisms that the Barrs have made”.

But this will be part of a much more general renewal of Te Papa.

Certainly the national museum looks kind of tired. The celebrated colossal squid, for instance, is so old it is starting to fall apart, and has been visibly stitched together, like an ancient roughly-darned sock.

Martin concedes some of the problems.

“When I first came through Te Papa well over a decade ago, 12 years ago, some of those same exhibitions are still there. Well, that’s what renewal is all about, to come up again with the excitement factor of new stuff.”

What new stuff? He’s open to ideas because “frankly I’ve never had an original idea in my life, but I’m quite good at using other people’s ideas”.

He’s asked his staff, for example, how to make better use of the vast blank plaza in front of the museum.

What about the yawning emptiness that greets the visitor on the first floor, though? Right now it holds a lonely reception desk. Why not put some of the masterpieces right there? Such as Michael Parekowhai’s brilliant red Steinway grand piano transformed into an elaborate Maori carving?

That, after all, would bring the art part of the museum out of the attic and into the front room.

Martin is clearly intrigued but he’s too good a politician to take it up. He needs to hear from his staff before starting to change things.

Martin’s voice has none of the musical lilt of Wales. He was brought up in Corby in England’s Midlands, “which is why my accent is very flat”.

His singing is pitch-perfect when accompanied by 70,000 others in a Welsh rugby stadium, he jokes, and he is a “failed viola player” (though good enough once to play in an orchestra). Martin has a very British habit of self-deprecation.

Coming to Te Papa, he says, is returning to his first love, which is the arts. He got an honours degree in history, specialising in modern eastern Europe, before he began a “30-year detour” managing hospitals in the UK and New Zealand.

Martin’s always running things. While running the DHB he was also chairman of the Auckland Philharmonia Orchestra (his wife, Samantha Martin, runs the NZ Blood Service).

His long stint in South Auckland gives him a particular take on the 14-year-old Polynesian targeted by Te Papa. The museum plans in two or three years to open a northern branch in downtown Manukau, “just 300 metres from my old office” at the DHB.

If you can’t get the poor kids of South Auckland to Te Papa, take Te Papa to them.

Purists decry the Disneyfied digitalism of Te Papa, where kids can play interactive games instead of experiencing Art itself.

But this objection is wrong, says Martin. Te Papa can reach far more of New Zealand in cyberspace than in the flesh. It can also display far more of its collections that way, since notoriously it can only put a small bit of it on show in the museum itself.

Anyone in New Zealand or outside it, for example, could download images of the museum’s great New Zealand art and view them as often as they liked.

Similarly with the kids who always want to play on a screen instead of contemplating the artefact itself. Martin says the digital approach can actually deepen their experience rather than cheapening it.

Martin cites the example of a lad’s experience on-screen of one of Te Papa’s Polynesian vaka (canoe).

“He said, ‘If I came and saw a boat it’s just a boat. But with this I get a sense of what my ancestors had to go through, what it was like to be on the ocean in this tiny boat, because I was trying to steer it by the stars …’ ”

The screen brought the vaka to life in a way the solitary object couldn’t.

The usual way of experiencing a museum used to be “analogue” – going to visit it, he says – while the digital was the exception.

“In the future that’s going to be the other way around. What will be valued more and more is the real analogue experience, the going somewhere and seeing it. And the digital experience will inspire you to do that.”

Then Te Papa really would be a museum for the millions.