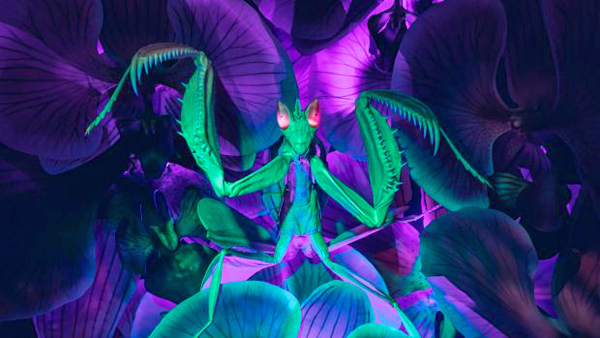 The clever orchid mantis is a master of deception and mimicry. Photo: Joel Checkley.

Bet you didn’t know that bees have hairy eyes. You read right; hairy eyes. Invisible to the naked human eye, there are hundreds of hairs sprouting from the multi-lensed eyes of bees. They grow from between the hexagonal tiles that make up the convex surface of the eye. Each hair tapers at the tip like a human eyelash.

But just because we can’t see bee eye hair doesn’t mean it is a detail to be overlooked in the new $4.6 million Bug Lab exhibition which opens at Melbourne Museum on June 23. Melbourne is the first stop on an international tour for the Wellington-designed and made exhibition.

Pitched as being “designed by bugs for humans”, the exhibition shows off the genius traits that often overlooked insects and spiders perform every day. From mind control, to swarm intelligence and precision flight.

Created by New Zealand’s national museum Te Papa Tongarewa and Weta Workshop, the group behind the sets, costumes, weapons and creatures for Peter Jackson’s The Lord of the Rings and The Hobbit trilogies, Bug Lab is big on getting the smallest of details right.

Amongst the challenges in the year-long design and construction phase was to make bees the size of beagles scientifically accurate. To do this, model makers from Wellington’s Oscar and BAFTA-winning Weta Workshop found themselves shaving bees – with a very sharp blade, magnification glasses and a steady pair hands.

“James Doyle from our 3D department even tried shaving cream as he had to test different ways to shave bees,” says Weta Workshop’s Bug Lab project supervisor Mona Peters. “It’s not something we’ve ever found ourselves doing before.”

Shaving the bees was part of the model-making process as it allowed the insects to be photographed without distortion. More than 600 images were taken, ensuring the bees were captured from all angles. The photographs were then combined to create a 3D image, which was used to make the lifelike bees on display. Weta workers weren’t expecting it to be so labour intensive.