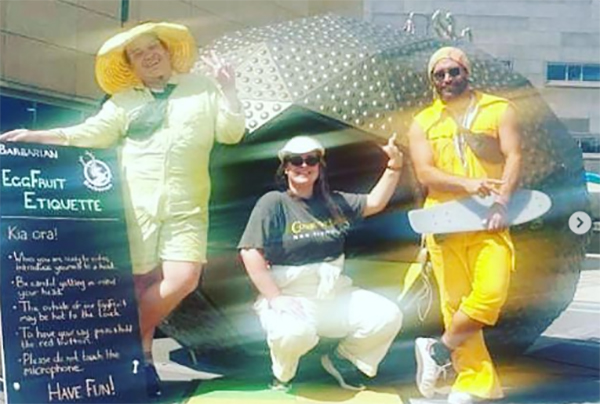 EggFruit was created by Barbarian Productions, a local theatre company that specialises in creating participatory experiences.

Are we a team of five million? Hundreds of people recorded their answers to this question in the EggFruit, a mobile recording booth that popped up next to Te Papa in the last week of February. Public Programmes Specialist Emma Ng explores the creative way that theatre company Barbarian Productions gathered opinions on Aotearoa’s Covid-19 response.

EggFruit was created by Barbarian Productions, a local theatre company that specialises in creating participatory experiences. The booth gathers the public’s thoughts and ideas, then these anonymous recordings play through speakers around the EggFruit, creating a kind of sound collage of voices for passers-by to hear. Like a lot of Barbarian creations, EggFruit celebrates the wide range of different perspectives and experiences that people bring with them.

As part of Making Histories, our ongoing programme reflecting on the pandemic, we’re interested in hearing and sharing how people are feeling about Covid-19. The EggFruit cast and crew came up with the question – ‘Are we a team of five million?’ – as an entry point for these conversations.

So what did people have to say?

Here are some of the questions and themes that came up over and over again:

Listening in, you can hear a variety of life experiences, accents, and relationships to Aotearoa coming through (although, of course, what we collected over four days in one location is by no means broadly representative). You’ll even hear a waiata or two!

There’s also a strong sense of the myriad issues that are inseparable from people’s experiences of the pandemic: inequality, tino rangatiratanga, racism, misinformation, workers’ rights, migration, and climate change all recur often in people’s responses.

These are themes that we’ll be continuing to explore through our Making Histories programme. So far, we’ve spoken with international students and Korean community groups about their experiences of Covid-19. Next we’ll be talking to essential workers ranging from supermarket employees to healthcare staff.

The week that Barbarian Productions were at Te Papa with the EggFruit was bookended by alert level changes due to community cases in Auckland. This was a reminder that we are still very much in the midst of the pandemic, despite it being a year since our first lockdown. Through Making Histories, we are hoping to capture some of the nuances of this time to better understand how Aotearoa has experienced Covid-19. As this programme unfolds, we’ll reflect together on how the pandemic has reflected our society’s strengths and flaws, as well as the lessons, values, and aspirations we might carry out of this collective experience.

A small sample of EggFruit responses

If we’re a team of five million, then what goal are we trying to achieve? Because I guess that’s what teams do. And if the goal is to stop Covid, then it’s an easy one because everyone wants that. But who’s leading us, to point us toward the other goals we can achieve if we are a team? Who’s captain, who’s the star player?

… too much separation in society to be a team, we need to be tighter, and we need to show more aroha for every group in our society …

I do feel like we are a team of five million, although for the first three years I did feel out of place and I did struggle to make friends coming from outside of New Zealand. But I feel, like, through the good and the bad, like, tragic events and Black Lives Matter and things like that, I’m really glad to say that we have come together more and we have become much more aware – myself included – so I’m really happy to say that I do feel like I am a part of the team of five million.

I believe we are a team of five million. However, one and a half, two million, are marginalised and we have to think about how we can support them back into the team.

I think we are a team of five million, and all the kids my age I know – well I’m pretty sure – are all working together like we should be, and helping each other around. Lots of others are doing it too.

I think we are learning how to become a team of five million. We’re getting there, we are communicating and debating a lot more to understand the diversity of who we are. But we do have a long way to go – I think examples being the divide between rich and poor, the issue with housing and property in this country. But I feel we are getting better at challenging each other and communicating.

I feel that the ability to be an individual has lessened because of the regulations swamping everybody, especially health and safety. It’s taken away the freedom to do things that we were all taking for granted years ago.

Yes I think we’re a team of five million. When I walk down the street and I see my local dairy and all the neighbours inside of it, I think ‘wow you’re another player in this and we’re all doing our bit.’

Do I think we’re a team of five million? No, no I don’t think we are. I feel like we’re more of a team of three million, with a couple of million people who don’t wanna play with us, or just wanna do their own thing, or don’t believe in what the super experts have said.

Are we a team of five million, huh? I think on the big things, yes. When it comes to the important things we can all band together and get things done. The problem is the smaller ones. We often divide ourselves along small lines on things that aren’t really important, important to our lives – just things that we do differently. And with those things, it’s not a matter of life and death for people, but we make it important when it’s really just a different way of living life. I think that if we let people do the small things differently and band together on the big things, that would be better, and then we’d feel more unified.

An unedited selection of the EggFruit recordings from late February: Listen to people answering the question