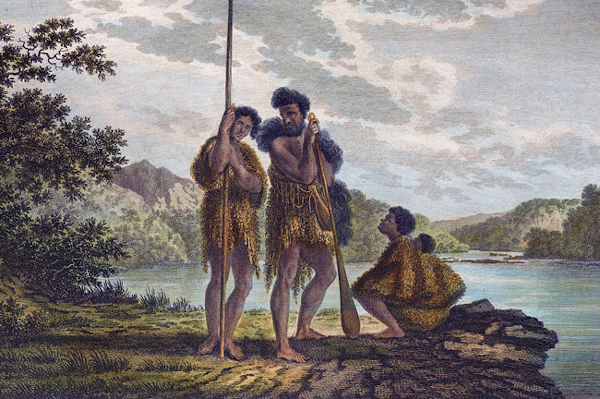 Janet Davidson, The Cook-voyage objects that travelled from Aotearoa to Britain – and back again, 7 November 2019

The tales of how some of the hundreds of objects collected by James Cook’s voyages to Aotearoa found their way to Te Papa are told in a new book by archaeologist Janet Davidson. Here, she selects a few to tell the stories behind them.

The journeys of the Cook-voyage items at Te Papa can be said to resemble the braided rivers of Aotearoa New Zealand. Just as those rivers eventually find their way to the sea, so the taonga made by Māori left their source here in Aotearoa and travelled by diverse routes to places on the other side of the globe, before returning on their separate journeys to a single location in Wellington.

In England, the crews of Cook’s ships Endeavour, Resolution and Discovery found a ready market for the items they had traded with indigenous peoples. Over time, these taonga found their way into private museums and then to other collectors as some of the museum collections were broken up and sold. The man-made items gathered on Cook’s three voyages included carvings, weapons, tools, instruments, household items, jewellery, costumes and bark cloth. At the time they were collected, they were called “artificial curiosities” to distinguish them from “natural curiosities” such as plants, animals and rocks, which were already popular collection items. 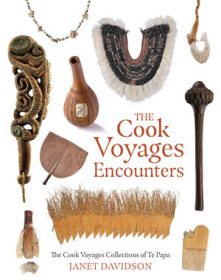 In contrast, most of the other major Cook-voyages-related collections in museums around the world were donated by one or two individual collectors.

At first, there was a blanket acceptance that all the items in these eight collections could be definitively traced to active trading between Cook’s ships and the indigenous people of Aotearoa, the Pacific, the Pacific northwest coast of North America and Tierra del Fuego. But decades of careful research by museum staff has eliminated a few of them. That work continues, especially by Rongo-whakaata iwi, whose tīpuna had the first encounter with Cook and his crew. 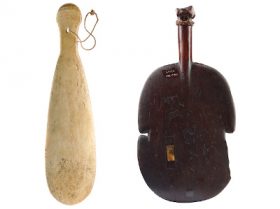 The process of piecing together the story of historical objects is well illustrated by two Māori weapons held in the collection, a patu parāoa (whalebone hand club) and a kotiate (wooden hand club). The whalebone club was part of the national museum’s first acquisition of Cook-voyage items in 1912, the St Oswald Collection. It was bought by collector Charles Winn (an ancestor of Lord St Oswald) from the sale of Bullock’s Museum in London in 1819. The kotiate was bought at auction in Wellington in 1988 with no history. Both bear the initials FW. Only one “FW” was listed among the personnel on Cook’s ships: Francis Wilkinson, who joined the Endeavour as an able seaman and rose to be master’s mate.

Wilkinson kept a journal, a copy of which is in the Alexander Turnbull Library, but it does not record how he acquired the two weapons. Carving initials into a whalebone club would not have been easy, and doing so shows Wilkinson’s determination to ensure that his curiosities did not end up in someone else’s possession in the crowded conditions below deck. 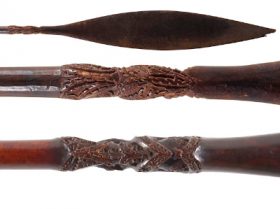 The exact time and place where a particular item or items were traded can seldom be documented but an important exception is a group of paddles exchanged between the Endeavour crew and local Māori on October 12, 1769, as documented in Cook’s journal.

This was several days after the voyagers, accompanied by the Tahitian master-navigator Tupaia, had arrived off the east coast of Te Ika-a-Māui (the North Island) and made landfall in Aotearoa for the first time. Cook and others went ashore at Tūranganui-a-Kiwa (now Gisborne) in search of fresh water. Misunderstandings arose during this first encounter and, tragically, nine Rongo-whakaata men were killed or wounded, including the rangatira Te Maro and Te Rakau, over the ensuing three days. The encounter was a disaster, and Cook named the area Poverty Bay “because it afforded us no one thing we wanted”.

The Endeavour then sailed south. On October 12, several waka approached the ship, but kept a safe distance away until one came from another direction, the crew of which expected a kind reception. The other waka then followed and brisk trading began. Fortunately, this time the engagement was peaceful. Māori offered their hoe (paddles) in exchange for Tahitian bark cloth and other items; one crew even offered to sell their waka.

Several hoes were taken back to England and one of them, along with part of the carved shaft of another, eventually became part of the Webster Collection, built up by Englishman Kenneth Webster and bequeathed to the National Museum when he died in 1967. Yet another hoe now in Te Papa’s collection, bought in 1987 but with no provenance information, is almost certainly part of the same group.

These stories reflect the many and varied ways in which collection items travelled from Aotearoa to Britain and back again. 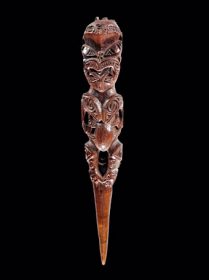 Māori rākau atua were often termed “god sticks” and were sometimes called tiki wānanga or rākau whakapakoko. The pointed tip that allowed them to be placed firmly in the ground caused some early European observers to describe them as “planting sticks”, thought to be used for planting the major crop of kūmara. However, they are more appropriately described as temporary shrines used by tohunga (priestly experts).

Rākau atua were first described by the Church Missionary Society missionary Richard Taylor, writing in his journal in the 1840s. He considered them typical of the carving and decoration of the Whanganui district. However, this beautiful object could almost certainly not have been collected on the Whanganui coast, given that the Endeavour did not make landfall there, suggesting that Taylor’s opinion, based on his local experiences, was almost certainly not correct.

In 1959 and 1961, former Dominion Museum ethnologist Terry Barrow described 27 rākau atua in museums around the world, including this one, but at that time he was unaware of the significance of this taonga as an item from Cook’s first voyage. But eventually a connection was made. After the voyage, Joseph Banks had employed a draftsman, John Frederick Miller, to draw some of the items that had been collected, and Miller’s drawing confirms the first-voyage provenance of this beautifully carved object. This was established by the anthropologist Adrienne Kaeppler in her book Artificial Curiosities in 1978.

This article was first published in the October 26, 2019 issue of the New Zealand Listener.