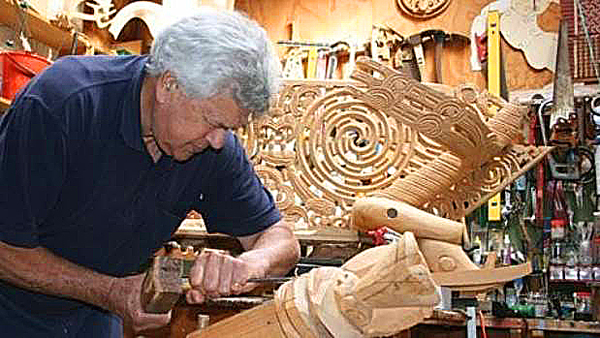 Cliff Whiting hard at work in his studio.

From building his own underwater camera in the 1960s, to editing videos on his computer, creating art from new technologies captivated Cliff Whiting his entire life.

His inspiration is revealed in a never-before-seen video, published by Stuff today. And when the pioneering NZ artist died, he was on the brink of taking his art into a whole new world of high-tech video.

Whiting, a driving force behind the introduction and establishment of Maori art in schools, and creator of Te Papa‘s modern marae, has been awarded Te Tohu o Te Papa Tongarewa Rongomaraeroa for his contribution to Maori art.

The Member of the Order of NZ – limited to the 20 greatest living New Zealanders – died in July aged 81. Just a few months earlier he  had purchased a brand new computer to work on video editing to go with his iPad, eldest son Gary Whiting said.

The master carver was always trying to introduce new technologies and techniques to see how they could be used to promote Maori art.

“He was into technology like you wouldn’t believe. He could do it all. He just loved it. He loved life. He was curious as hell about everything.”

Except Facebook. He could never quite get his head around that one.

Gary Whiting remembered his father heading out with his mates to the water off Nelson in the early sixties using the latest wetsuits and diving tanks.

The thrill of breathing underwater might be enough for some – but Whiting wanted more, he wanted to photograph the sea.

He would go on to design his own “camera house”, a plastic enclosed case and probably one of the first in New Zealand.

“There was always continual curiosity about things and making things and creating things, it was an absolute constant,” he said.