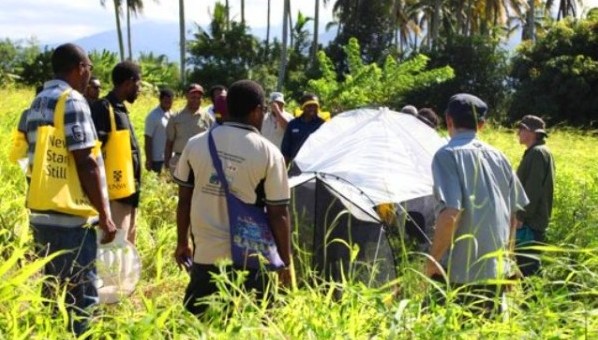 I’m a beetle expert with plenty of experience in identifying and describing beetles from Australia and around the world. Recently I was privileged to work in Papua New Guinea (PNG), helping teach entomology.

Papua New Guinea is Australia’s nearest neighbour, but is about as different as can be in terms of its agriculture and forestry. Of course insect pests are hugely important in PNG but they are almost completely different from the species in Australia. In Australia, we think the insect fauna is poorly explored with about 30% of species thought to be described, but the insect fauna of PNG is also very diverse but much less well known.

The poorly known insect fauna of PNG creates great challenges. For example, where do you get help if you are growing a crop in PNG and you have pests? Developing local expertise is the answer. My colleague Professor Gerry Cassis at the University of New South Wales saw the need, and put together a team of scientists, including myself, to help PNG agriculture and other natural resource agencies.

Our counterpart organisation in PNG is the National Agricultural Research Institute (NARI), a government department which has its headquarters in Lae. As well as being kind and helpful hosts they made their research infrastructure available for the workshops and organised the registration and accommodation of the participants. Many different crops and their pests were available for study on the NARI land.

Twenty-four people took part in our 5-day entomology workshop, in Lae, in November 2014. The participants came from the Forestry Department, the local university, several different crop research organisations, the PNG quarantine agency (NAQIA) and NARI. They all needed entomological expertise in their work but had greatly varied levels of experience and knowledge, and were aged from 21 to 60.

We taught them everything from collecting a specimen to curating and identifying it, and determining its likely biology.

The participants gave presentations on the final day, based on what they had learnt, to show that they could react appropriately to the detection of a new pest species.

It was a lot of work for both sides, but the feedback we received was overwhelmingly positive. I felt like I was saying goodbye to old friends when we left Lae.

We are now running capacity building workshops in entomology in major regional centres of PNG, through to the middle of 2016. I am eagerly preparing for the next workshop, which will take place in Madang in May.