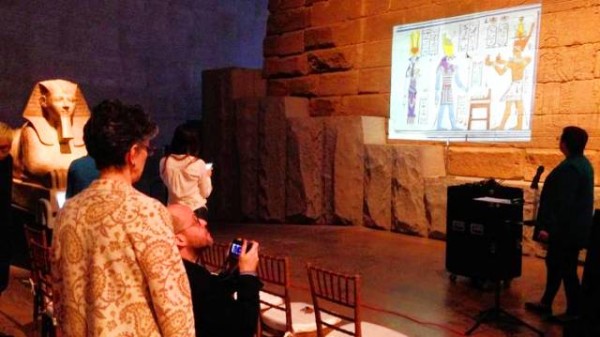 Ellen Gamerman, A Look at the Museum of the Future, The Wall Street Journal, 15 October 2015

There’s a revolution afoot inside museums as technology sparks experiments in exhibit design. From virtual reality to 4-D films, here’s what to expect

During a recent event for kids at New York’s Metropolitan Museum of Art, visitors put on virtual-reality goggles and looked at Jackson Pollock’s “Autumn Rhythm (Number 30).” As they gazed through their 3-D headsets, splatters of black and white paint appeared to break free from the 1950 canvas and float past their eyes. Children and adults tried to touch the illusion, waving at the images in the air.

Museums are flirting with change that may be more revolutionary than at any other point in their history. The forces rocking the technology world—cheaper screens, miniaturized mechanics and increased computing power—are prompting a rich period of experimentation in exhibit design. For museums, such advancements could attract diverse visitors, lure young people and change the way audiences learn about art, science and nature.

“There’s a tremendous amount of innovation in museums right now—it’s a really exciting time,” said Kurt Haunfelner, vice president of exhibits and collections at the Museum of Science and Industry, Chicago. Museums are “aware that the expectations of their audiences are changing fairly dramatically and I think they are committed to experiment and prototype different approaches to engaging an audience.”

Around the globe, major institutions are trying out new digital tools. During the summer, the Natural History Museum in London unveiled a virtual-reality film that recreates ocean creatures from 500 million years ago. This year, the Illinois Holocaust Museum & Education Center began demonstrating a life-size interactive video of a Holocaust survivor that it hopes one day to display in three dimensions like a hologram. The Met, which created a media lab about three years ago to investigate how technology can change visits to its galleries and test other ideas, is exploring a colorful way to present its famed Temple of Dendur.

“The MediaLab is looking at what the museum will look like in 20 to 25 years,” said lab manager Marco CastroCosio.

While aimed at boosting crowds, the new technology could blur the lines between education and entertainment. As institutions focus on the thrill of new displays, some observers caution that the art and artifacts could get lost in the commotion. “It’s important that museums be responsive to audiences, but it can tip easily into making it all about the audience and maybe not pushing the audience into something outside their own experiences,” said Elizabeth Rodini, director of the museums and society program at Johns Hopkins University.