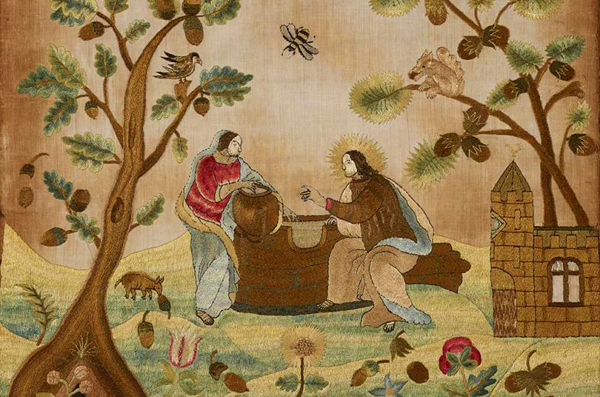 The objects below are mainly decorative and through them we see changes in style, materials, and techniques. They offer a valuable insights into a bygone age and highlight the impact of religion, trade, culture, and the way European society viewed itself.

This is a rare work of craft, a religious object too, made for ceremonial splendour over 500 years ago.

Created to honour God, they also reminded worshippers of the principle message of the Roman Catholic Church – Christ’s death for the salvation of mankind . . . The 11th-century Benedictine monk Theophilus described how fine wire was made by pulling metal rods through a tool called a draw plate.

It was a time-consuming and methodical process. Eventually the wire was wrapped around silk thread for the careful work of embroidering the divine image.

This meticulous task was often carried out by unmarried women from noble families who had found refuge in Italian nunneries.

Two figures at a well, the English oak and chestnut tree with a squirrel and scavenging dog, may at first glance suggest a charming English pastoral scene.

But look closely and you will see a halo around the head of the central figure. The image is in fact a reminder of the gospel story of Jesus converting the Samaritan woman at the well, transporting this textile into the realm of religion.

It’s a cue too that in England religious embroideries were made for the home, rather than the church, following the period of religious upheaval known as the Protestant Reformation.

Embroideries like this were replicated due to the use of pattern books available at the time.

Much like Protestant texts, they were able to be circulated because of the advance of the printing press. Reproduction aided the transmission of information, style, and meaning.

Domestic textiles were among the most valued works in the home during the 17th century, with needlework carrying out the important function of decorating clothing, furnishings and wall hangings.