You are here: Home » Articles filed under: 'News' » Article: 'Terror Nullius at ACMI' 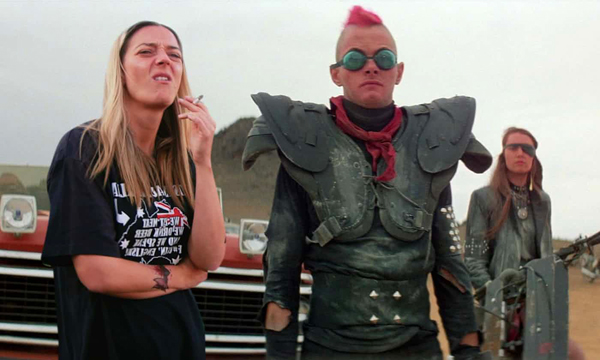 A still from the film Terror Nullius, by the Australian art duo Soda_Jerk, which premieres on Tuesday at ACMI. Photograph: ACMI.

A philanthropic trust that gave $100,000 to fund a new Australian movie has withdrawn promotional support for the film on the eve of its release, describing it as “a very controversial work of art”.

The Ian Potter Cultural Trust withdrew the promotional support from one of its key works, the political satire Terror Nullius, one day before the film’s world premiere.

Sydney-born sisters Dan and Dominique Angeloro, the makers of the film through their collective Soda_Jerk, describe Terror Nullius as “a political revenge fable which offers an un-writing of Australian national mythology”.

The 55-minute film was awarded a $100,000 grant by the Ian Potter Moving Image Commission in 2016. The commission is a 10-year initiative, established by the Ian Potter Foundation, for new projects by mid-career Australian artists. Sir Ian Potter, who died in 1994, was a successful banker, businessman and philanthropist in Melbourne after the second world war.

The film-makers published a Facebook post on Sunday, alleging the foundation had “pulled their support from the work they commissioned, because it’s not in line with their conservative political values”.

“The Ian Potter Foundation like the idea of a politically engaged work much more than the reality of one,” they wrote, describing Terror Nullius as “a paradoxical vision of a nation where idyllic beaches host race riots, governments poll love-rights and the perils of hyper-masculinity are overshadowed only by the enduring horror of Australia’s colonising myth of terra nullius”.

They also claimed that representatives of the trust called the film “un-Australian”.

A representative for Ian Potter Cultural Trust would not confirm this when contacted by Guardian Australia but the trust released a statement on Monday describing Terror Nullius as “a very controversial piece of art”.

“The Ian Potter Cultural Trust respects their right to create it, to show it and for audiences to form their own opinion in respect of its message,” the statement said. “The Ian Potter Cultural Trust has stated to the Australian Centre for the Moving Image that in the circumstances it does not wish to be associated with the marketing or publicity promoting this production.”

Through the statement, the trust also announced that all financial commitments to the art collective will be met in full.

Soda_Jerk told Guardian Australia: “While on a personal level it’s relieving to know they’ll honour their financial commitment to the work, we do feel this is an issue much larger than empty pockets. It’s about the vexed relationship between art and private interest. And also what it means to be Australian, un-Australian or otherwise. If ‘very controversial’ is another way of saying that the work is willing to start uncomfortable conversations, then we’ll happily wear it.”

According to their website, the collective’s style comprises a combination “of documentary and speculative fiction” which makes use of film sampling techniques to create new narratives.

According to its website, the Ian Potter Foundation prides itself on having “a strong track record of funding projects that respond decisively to key issues and develop our creativity and capacity as a nation”.

The premiere of Terror Nullius will take place at the Australian Centre for the Moving Image (Acmi), in Melbourne’s Federation Square, on Tuesday 20 March. Acmi delivered a statement standing by the film: “Acmi is proud to be associated with the commission and remains totally committed to presenting the work and supporting the artists.”

Soda_Jerk have held solo exhibitions at a range international institutions including Videotage in Hong Kong, the National Museum for Women in the Arts in Washington and the Künstlerhaus Bethanien in Berlin.