You are here: Home » Articles filed under: 'News' » Article: 'MOADOPH on The Apology 10 years on'

MOADOPH on The Apology 10 years on

February 15th, 2018 | Browse other: News. | Tagged with: apology to the Stolen Generations, Museum of Australian Democracy | 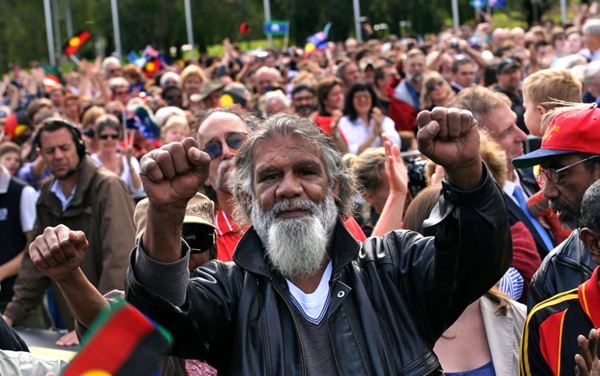 Writer Paul Daley shares his views on the legacy of the Apology.

Kevin Rudd’s apology to the Stolen Generations of Aboriginal and Torres Strait Islander children a decade ago endures as a totemic Commonwealth gesture towards Indigenous Australia.

Little official acknowledgment – let alone an apology – had ever been conceded in Federal Parliament to the systemic wrongs inflicted upon Indigenous people. The symbolism of Rudd’s apology on 13 February 2008 remains profound today because governments have ceded so little since.

Onlookers packed the public galleries. Outside Parliament House the lawns of Federation Mall were crowded with thousands of Indigenous witnesses to an apology so historically noteworthy that posterity has come to record it as The Apology.

It was a rhetorically modest and implicitly legally cautious speech, to avoid claims of immediate reparation. It was freighted with allusion – though not specific concession to – many other egregious wrongs colonialism has imparted to Australia’s Indigenous peoples.

“We apologise for the laws and policies of successive Parliaments and governments that have inflicted profound grief, suffering and loss on these our fellow Australians. We apologise especially for the removal of Aboriginal and Torres Strait Islander children from their families, their communities and their country.”

Then came a flood of applause, cheers and tears. People embraced. This was a moment of immense promise, a time to reflect on the long, arduous and continuing journey towards reconciliation – or conciliation – still unrealised.

The Apology had been a long time coming, originating with the Human Rights and Equal Opportunity Commission’s 1997 report – “Bringing Them Home”. The report summarised the findings of a commission inquiry, initiated by the Keating Government in 1995, into “the past laws, practices and policies which resulted in the separation of Aboriginal and Torres Strait Islander children from their families by compulsion, duress or undue influence, and the effects of those laws, practices and policies”.

More than 500 Indigenous people made submissions.

The commission recommended that governments, police, churches and non-government agencies apologise for involvement in forced separations. By 2001 all state and territory governments had apologised. But John Howard, prime minister since March 1996, refused to apologise on behalf of the Australian people.

At a May 1997 Aboriginal Reconciliation Convention, delegates booed and turned their back on Howard as he declared: “Australians of this generation should not be required to accept guilt and blame for past actions and policies over which they had no control. However, we must acknowledge past wrongs, understand that they still cause a great deal of personal distress and resolve to improve areas of indigenous disadvantage both now and into the future.”

The Apology became the first item of government business in the House of Representatives after Rudd Labor’s election in November 2007.

“Through one direct act, the parliament has acknowledged the existence and the impacts of past policies and practices of forcibly removing Indigenous children from their families, and by doing so has paid respect to the Stolen Generations for their suffering and their loss, and for their resilience, and ultimately, for their dignity.”

The Apology’s profound symbolism has translated into few positive improvements in the economic, social, medical and educational outcomes of Indigenous Australians, who remain among the world’s most disadvantaged people.

Successive governments’ “close the gap” indicators show that some disparities between Indigenous and other Australians may be widening.

Since the Turnbull Government’s rejection of a requested Indigenous voice to parliament by the 2017 Uluru meeting of national Indigenous delegates, relations between many Aboriginal leaders and the Commonwealth have been marked with heightened animosity.

In his 1992 Redfern speech, the then prime minister Paul Keating specifically acknowledged the broad range of malevolent consequences of colonialism on Australia’s Indigenes, saying,

“It begins, I think, with that act of recognition . . . that it was we who did the dispossessing. We took the traditional lands and smashed the traditional way of life. We brought the diseases. The alcohol. We committed the murders. We took the children from their mothers. We practiced discrimination and exclusion.”

The opportunity for Indigenous advancement that stemmed from The Apology may not be entirely lost. But it is fast diminishing.