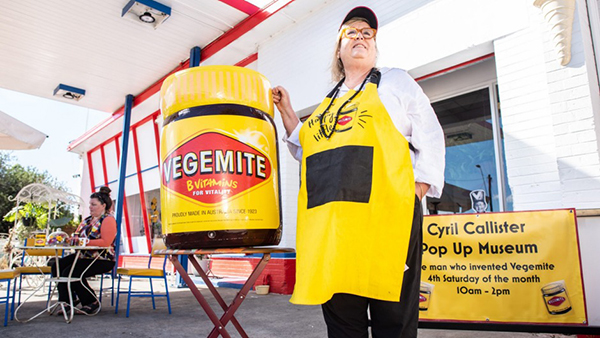 Liza Robinson, from the Cyril Callister Pop-up Museum, wants Beaufort to be to Vegemite what Parkes is to Elvis. Photo: Richard Cornish.

Vegemite is turning 100 next year, and a little town in western Victoria is claiming the invention as its own by creating a museum in its honour.

Residents of Beaufort, 50 kilometres west of Ballarat, are paying tribute to food technologist Cyril Percy Callister, born in nearby Chute, by opening a pop-up museum. 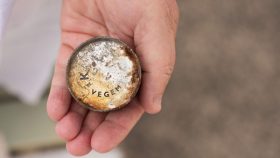 It was Callister who developed an all-Australia yeast spread in 1923 to compete with British-made Marmite while working as a food technician with manufacturing company Fred Walker & Co.

Almost a century on, Beaufort community leader Liza Robinson, with the help of volunteers, has taken over a former 1950s service station and installed a temporary museum, having struggled for four years to prompt government and business to share their vision.

“It’s really is just a toe in the water,” says Robinson. “We are asking people to donate their Vegemite memorabilia so Beaufort becomes the national repository.” 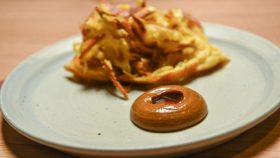 Vegemite was not an overnight success, says Robinson. “Sales were originally flat, and the sales team at Fred Walker & Co did not share Callister’s vision. They did not market its health benefits, despite Callister proving it was high in B vitamins.”

When Fred Walker & Co gained the licence to make Kraft processed cheese in Australia, the black spread’s fortune began to change as the company was able to market it alongside the new long-life cheese. And when World War II began, Vegemite was packed into Australian soldiers’ ration kits to boost their B vitamins, creating a captive audience who adopted it into their daily diet when they returned home.

The museum’s nascent collection includes an original WWII army ration tin, a small bottle of Vegemite that was handed out to new mothers to bolster their nutrition during breastfeeding, and vintage posters relating to the Happy Little Vegemite advertising campaign, which began in 1954.

In recent years, Vegemite has found its way onto high-end menus around the country, appearing in dishes at Attica and Dinner by Heston in Melbourne.

When celebrated Danish chef Rene Redzepi opened his Sydney Noma pop-up in 2016, he put Australian bush foods on the menu and developed his own version of Vegemite, which he served as a dipping sauce for abalone schnitzel.

Watching on was a young chef Khanh Nguyen. Born in Marrickville to Vietnamese parents, Nguyen first tried Vegemite as a child. “It reminded me of a dish mum made with minced pork and loads of nuoc mam (fish sauce) and shrimp paste,” he says. “It and Vegemite have this salty, umami flavour. So when I went to Melbourne and opened Sunda in 2018 I wanted to make a roti (Malaysian flatbread) with Australian flavours.” 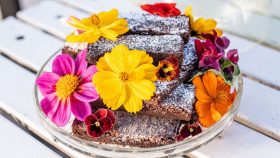 After touring the Beaufort museum, visitors can pop into The Sweet Stop next door to buy Vegemite brownies. Photo: Richard Cornish.

Today, his Vegemite-inspired curry with house-made roti lands on almost every table at Sunda.

At Hickson House Distilling Co. in The Rocks, Sydney, Vegemite adds umami and a velvety mouthfeel to a kangaroo tartare dish. “Normally, I’d use a splash of very British Worcestershire sauce,” says English-born chef David Peniston. “But we’re in a distillery using Australian ingredients and botanicals. Vegemite just fitted in.”

At the first Sydney branch of global burger chain Wahlburgers, founded by Mark and Donnie Wahlberg, their brother, chef Paul Wahlberg, developed a Vegemite aioli for the opening menu.

“You find a lot of chefs who were not born here, or did not grow up with Vegemite are more likely to use it in the kitchen,” says Canadian-born Jordan Clay from Pipis Kiosk in Melbourne’s Albert Park, where Vegemite flatbread with heirloom tomatoes, fresh herbs and olive oil makes seasonal appearances on the menu..

“We taste it for the first time and go ‘Wow! A new ingredient’. It’s adding salt without salt, the way Japanese use miso or shoyu (soy sauce) to add a little salt and layers of deliciousness.”

At the Beaufort museum, visitors will be able to pop into The Sweet Stop, a pop-up bakery housed next door, to buy Vegemite scrolls and Vegemite brownies.

Robinson and her team of self-declared Vegemaniacs have a vision. “We want Beaufort to be to Vegemite what Parkes is to Elvis, with a yearly festival celebrating its founder. Vegemite is in our DNA.”

The Cyril Callister Pop-Up Museum opens this weekend at Servo 23, 23 Neill Street, Beaufort and will open on the fourth weekend of the month. Details: cyrilcallisterfoundation.org