You are here: Home » Articles filed under: 'News' » Article: 'The death of the art gallery?'

The death of the art gallery? 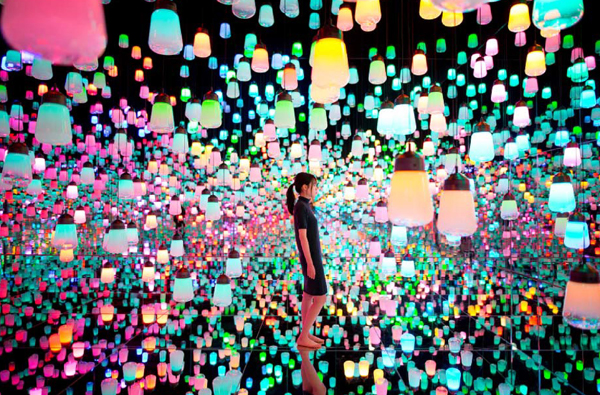 “Forget staring at a painting in a white-walled gallery. The world of art appreciation will receive a dynamic post-millennial jolt this month”.

Danielle Demetriou, The death of the art gallery? Japan’s new digital museum may offer a glimpse of the future, The Telegraph, 12 June 2018

I’ve stood beneath waterfalls, scattered trails of petals, followed shoals of fish, wandered through rice fields, bounced on a galaxy of planets, surrounded myself with waves – and now my teacup is exploding with flowers.

Forget staring at a painting in a white-walled gallery. The world of art appreciation will receive a dynamic post-millennial jolt this month, with the launch of a new digital art museum in Tokyo.

Mori Building Digital Art Museum: teamLab Borderless, which opens June 21, fortunately has a concept which is a bit catchier than its name: the world’s first digital museum of its scope and scale, it’s a new generation showcase of immersive, interactive digital art created by teamLab, a fast-growing Tokyo collective of so-called “ultra technologists”.

As typhoon rains lashed Tokyo on Monday morning, I swapped grey skies and umbrella-snapping winds for a sneak preview of the new museum, housed in a sprawling former games arcade in Odaiba, near Tokyo Bay.

Spanning a spacious (and at times, disorientating) 10,000 square metres on two dark-walled levels, its statistics are as impressive as its installations: it’s home to 50 artworks loosely divided into five areas, orchestrated by a complex network of 520 computers and 470 high-tech projectors.

Before being let loose to explore, Toshiyuki Inoko, who founded teamLab with a handful of University of Tokyo friends in 2001 (it now has 400-plus staff and countless global exhibitions), offers a clue about its contents.

Standing before a distractingly vast waterfall, birds darting above his head and kanji tumbling from the sky, he says:  “Time here changes constantly – the seasons and flower forests are always changing. Scenery is linked to realtime. It exists now but you’ll never be able to see it exactly the same way again. It is a completely new world.”

He adds: “There’s no direction. Just wander and explore with your own body. Discover your own pathway and find something new.”

It’s a refreshing approach, particularly in Japan, where art institutions are normally bound by countless rules enforced by eagle-eyed attendants – and so I wander a little aimlessly into the nearest corridor and follow a flower-strewn lion on a wall, who lets out a roar as I touch it, before petals flutter to the ground.

Spotting an opening, I wander though an unmarked black curtain and find myself in a square room with pounding drumbeats and a dazzlingly agile display of dozens of white spotlights.

Exiting another doorway, I am submerged in a flower forest, a hypnotic spectacle of red and yellow flowers tumbling endlessly from walls, with a string of box-like spaces containing panels of individual digital artworks, all of which move endlessly – from monochrome calligraphic strokes to intensively detailed organism-like forms.

The best spaces, however, are stumbled across almost accidentally – one is a seemingly endless rice field, in a constant state of flux, reflected infinitely in mirrors, complete with green lotus leaf-like “pods”, floating dandelions and passing fireflies.