You are here: Home » Articles filed under: 'News' » Article: 'The Delight of the Diorama'

The Delight of the Diorama 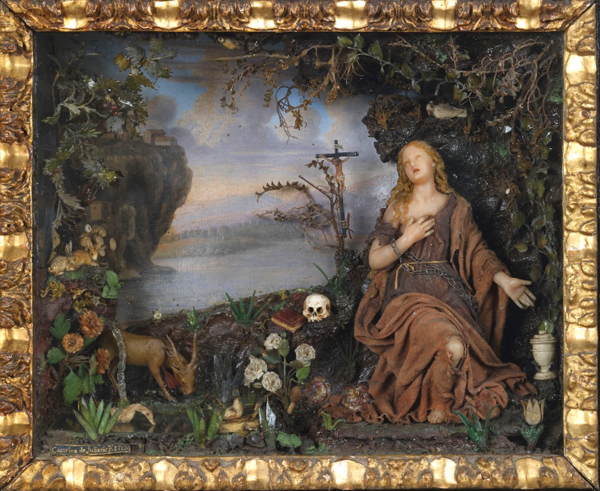 Jenny Che, The Enduring Delight of the Diorama, Hyperallergic, 5 August 2017

At Palais de Tokyo, selections from nearly two centuries of enclosed models cater to our eagerness to be voyeurs.

PARIS — More than a decade before Louis Daguerre reshaped modern photography with his image of a shoe-shiner working on Paris’s Boulevard du Temple, he’d come to understand that the key to captivating an audience was seducing them with imagined realities.

A painter turned set designer for the Paris Opera, Daguerre excelled at creating sweeping panoramic views of city landscapes. In 1822, he opened the first diorama, a moving-image show that bore little resemblance to the museum displays we know today. He presented a trompe l’oeil spectacle in which a painting appeared to change before viewers’ eyes: Different scenes were painted on each side of a near-transparent canvas, and each would be revealed separately, depending on whether the canvas was lit from the front or the back. Mounted in a special theater that rotated the audience for each view, the diorama was a hit — at least among the wealthy patrons who could afford it — and foreigners flocked to Paris to get a glimpse of the illusions.

Only one of Daguerre’s dioramas remains today, but their influence was lasting, as a new exhibit at the Palais de Tokyo in Paris shows. Later interpreters of the diorama — a term that came to encompass miniature models as well as naturalistic scenes of taxidermied animals in museums — knew that viewers wouldn’t be able to resist being fascinated by things they knew were fake. And contemporary artists would bring new life to the form decades later, offering up enclosed concoctions that pandered to our eagerness to be voyeurs.

The most enchanting pieces on view are those that recreate the play of light that characterized Daguerre’s dioramas. In one series from the 18th century, celestial scenes, dense with shooting stars and vaguely Grecian imagery, were cut into cardboard and lit dramatically in warm tones. There’s also a set of delightful miniature painted slides from 1849 that would have been inserted into the Polyorama Panoptique, an optical toy device originally sold as a diorama souvenir. For these, artists made tiny incisions in streetlamps and windows to allow light to pass through, so that in the space of half a minute, a calm afternoon along the Seine would transform into a festive night scene, with fireworks bursting over the river. In another slide, a cathedral bathed in sunlight turns into the scene of a sermon at sunset, with the crowd illuminated by a dazzling, newly emerged chandelier. It’s impossible not to be transfixed by these shifting scenes, and to wonder at the magic of such a simple mechanism marking the passage of time.

Today, dioramas are most closely associated with natural history museums, where lifelike animals are meticulously arranged against a painted backdrop to foster a semblance of reality. Conservationist Carl Akeley, driven by his concern for the survival of gorillas, created the first ones for New York’s Museum of Natural History in 1889. (That institution would later be lampooned in the Ben Stiller movie Night at the Museum, clips of which open and close the Dioramas exhibit.)

There’s no shortage of that sort of diorama on display here, including an impressive stuffed albatross by 19th-century taxidermist Rowland Ward, but the works that really stand out are those that wink at the absurdity of dioramas and our modern embrace of sanitized, packaged nature. Water Potter’s “Happy Family” (1870) packs rabbits, puppies, and birds perching on cats’ heads into a house-shaped glass box, making for a rather creepy batch of cute pets. A lone monkey in a scarlet bowtie huddles in a corner, the only one who appears aware of the serious incongruity of the arrangement. Richard Barnes’s photos of museum dioramas after visiting hours — employees cleaning fake snow, a giraffe strung up and ready to go back to storage — similarly puncture the illusion of reality that we’ve willed ourselves into believing.