You are here: Home » Articles filed under: 'News' » Article: 'The dinosaur Queenslanders dig' 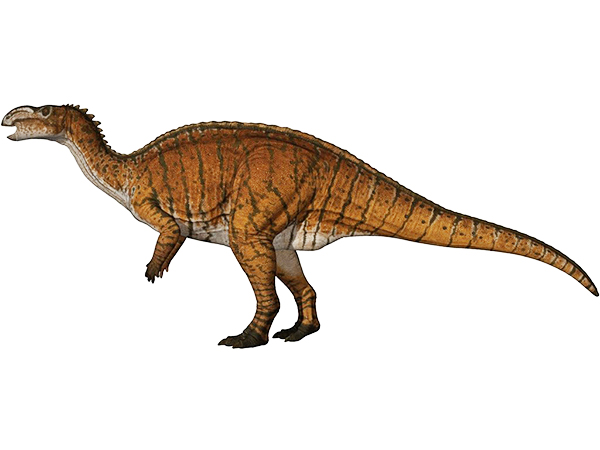 Unearthed in 1963, the Muttaburrasaurus is Queensland’s tenth official fossil emblem.

Minister for Tourism, Innovation and Sport and Minister Assisting the Premier on Olympics and Paralympics Sport and Engagement, The Honourable Stirling Hinchliffe.

The Muttaburrasaurus langdoni will now become part of Queensland’s official identity after it topped a popular public poll to select the State’s fossil emblem.

The 12 shortlisted fossils featured dinosaurs from both land and sea, early mammals, and flora, all discovered across Queensland

Of the nearly 9000 votes cast by Queenslanders, the ornithopod emerged as the clear popular choice.

“The 100-million-year-old, plant eating dinosaur was discovered in 1963 and named after the Central Queensland town of Muttaburra,” the Premier said.

“I’m sure it will be an enduring emblem Queensland can be very proud of.

“Along with our official coat of arms, flag and badge our emblems highlight the many wonders and beauty of our state.

“The Cooktown Orchid, koala, Great Barrier Reef Anemone fish, brolga, the sapphire, and our official colour – the mighty maroon, are all iconic symbols.”

The Premier said the popularity of Muttaburrasaurus for the State’s official fossil emblem highlights the importance of dinosaur tourism in Outback Queensland.

“A scale model of a Muttaburrasaurus named ‘Hughie’ is the star attraction at Hughenden’s Flinders Discovery Centre,” the Premier said.

“I encourage Queenslanders to get acquainted with our new fossil emblem by planning a visit to Outback dinosaur destinations.”

Queensland’s rich palaeontology discoveries have generated world-wide interest among experts and have attracted thousands of tourists to the Outback to see the fossils find firsthand.

Tourism Minister Stirling Hinchliffe said Cooper or Australotitan cooperensis, unearthed west of Eromanga in 2005 was the next most popular fossil.

“Just over 13 per cent of Queenslanders supported Cooper – the largest dinosaur ever found in Australia – as their favourite for the State’s fossil emblem,” Mr Hinchliffe said.

“Among the Queenslanders casting their vote, we’ve seen a clear preference for land-based dinosaurs over fossilised plants to best represent the State’s prehistoric past.

“The big winner of our search for the State’s fossil emblem is Outback Queensland tourism where many of the southern hemisphere’s greatest dinosaurs are found.

“Thousands of visitors travel to Outback Queensland every year to walk in the footsteps of dinosaurs and discover our rich palaeontological history.

“Everybody loves dinosaurs, they generate millions of dollars for the visitor economy, and we want to see Outback Queensland continue to grow as Australia’s paleo capital.

“That’s why the Palaszczuk Government is investing in a dinosaur tourism roadmap to highlight Queensland’s best prehistoric experiences.”

Queensland Museum Network CEO Dr Jim Thompson said while there was an outstanding line up of nominees for the State’s Fossil Emblem, he couldn’t think of a more worthy winner.

“Muttaburrasaurus has been synonymous with Queensland Museum since it was described by our palaeontologists in 1981, and thanks to the iconic replica skeleton that stands proud within the museum, Queenslanders have come to know and love this home-grown dinosaur over the decades,” Dr Thompson said.

“Mutt, as people affectionately call it, is one of the most complete skeletons of an Australian Dinosaur and is a great ambassador for palaeontology and dinosaur history.”

“I started volunteering at the Queensland Museum as a kid 30 years ago and Muttaburrasaurus was the first dinosaur fossil I got to work on,” Dr Hocknull said.

“It inspired me then, as it will do for countless budding palaeontologists into the future.

“I used to dig dinosaurs as a kid, but now I do it for real and I can thank Muttaburrasaurus for this.”

The next step in making Muttaburrasaurus the state’s fossil emblem includes amending the Emblems of Queensland Act 2005 to confirm ‘Mutt’s’ official status.